Item Sold Out
Notify me when this item is available
James Suckling 90
Theres plenty of influence of this rich vintage with dark berries and deep tannins defining this wine. Drink or hold.

Fresh and ripe stone fruits such as cherry, peach, apricot and plum. The palate is fleshy, fruity, with hints of liquorice and spice. It complements poultry, grilled steak, cold cuts, sausages, pork or lamb stews, and cheeses.

James Suckling 90
Theres plenty of influence of this rich vintage with dark berries and deep tannins defining this wine. Drink or hold.

Fresh and ripe stone fruits such as cherry, peach, apricot and plum. The palate is fleshy, fruity, with hints of liquorice and spice. It complements poultry, grilled steak, cold cuts, sausages, pork or lamb stews, and cheeses.

The grapes are hand harvested and undergo a semi-carbonic maceration. There is no destemming and the wine ages in stainless steel and concrete for 12 months prior to bottling. La louve stands for a Roman she-wolf because the vineyard is crossed by the old Roman roads from Lyon to Autun. Grapes have been grown in this area for 20 centuries.

The Brisson family has been working in Beaujolais, France since 1431. Michel Brisson, Grard's father, became the owner of Domaine Brisson in 1956. Until 1974, he devoted himself to introducing modern production methods for the vineyard and cellar and updating the domain's equipment. After becoming a winemaker, Grard joined the family business in 1974 and since 1980, when his father died, has been carrying on the development of the propery, with a focus on thoughtful and environmentally sound management practices. Domaine Brisson has been awarded TERRA VITIS certification for their commitment to sustainable farming in their vineyards. Grard has been practicing reactive viticulture (agriculture raisonne) since the 1970s.

View all from Domaine Gerard Fiou 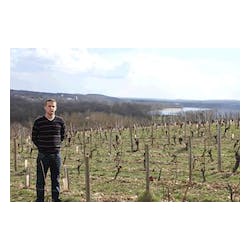 Domaine Gerard Fiou is a small family domaine in the east of the Sancerre appellation in the town of Saint Satur. There are only a handful of producers here and the soil is unique in that it has a high percentage of silex (or flint) which typically is identified with Pouilly Fumé, which lies just across the Loire river. The domaine now has just under 10 hectares, and they are in the process of converting to certified organic viticulture. Only 15% of the Sancerre appellation has these special silex soils. The terroir, coupled with the older vineyards (an average of 60 years old), gives the wines have a unique and intense mineral expression that is distinctly Sancerre.