View Cart / Checkout
Loading... Loading cart
Total:
—
0
Cart
Delivery
Search
Menu
Home » Wine » Red Wine » Beaujolais » Domaine Chanrion Cote de Brouilly 2019
Sample Image Only
Domaine Chanrion Cote de Brouilly 2019
James Suckling 93
"A restrained and subtle wine, considering the ripeness of the vintage and the generous body. This has a lot to do with the delicacy of the cherry aromas and spot-on balance. Long, suave finish that is not a jot loud or obvious. Drink or hold."

Item Sold Out
Winery: Domaine Chanrion
Category: Beaujolais
Size: 750mL (wine)
Alcohol by vol: 14.5%
Closure: Cork
Item ID: #42756
Region: France » Cote de Brouilly
Other Similar Items
$25.95 WE 95
Domaines Dominque Piron Morgon Cote du Py 2019
$20.95 WA 94
Bernard Diochon Moulin a Vent VV 2020
$15.95 WE 93
Michel Tete 'Cuvee Tradition' Julienas 2020
$25.95 WA 92
Chateau Thivin Cote de Brouilly 2021
$17.95 VM 92
Maison L'Envoye Morgon Cote du Py 2019
$28.95 VM 92
Domaine Guy Breton Regnie 2019
$10.95
Louis Jadot Beaujolais Villages 2021
$24.95
Domaine Foillard Beaujolais Villages 2020
$15.95
Dufaitre 'Premices' Beaujolais 2021
$17.95
Laurent Perrachon et Fils Julienas 2020
$20.95
Clos de la Roilette Fleurie 2021
$13.95
Domaine Dupeuble Pere & Fils Beaujolais 2021
Information
Questions
Size / Vintage Options
Reviews
Item Description
James Suckling 93
"A restrained and subtle wine, considering the ripeness of the vintage and the generous body. This has a lot to do with the delicacy of the cherry aromas and spot-on balance. Long, suave finish that is not a jot loud or obvious. Drink or hold."
About Domaine Chanrion
When Nicole Chanrion began her career in the 1970s, convention relegated women to the enology labs and kept them out of the cellars--even her mother thought winemaking was man's work--but she would not be deterred from her dream of becoming a vigneronne. With six generations of family tradition preceding her, she grew up helping her father in both the vineyards and the cellar in the Côte-de-Brouilly, one of the southernmost crus of the northern Beaujolais. Though she is mild-mannered and slight of build, her determination and conviction have consistently defied all doubts. Ever since taking over the family domaine in 1988, she works all 6.5 hectares entirely by herself, from pruning the vineyards and driving the tractors to winemaking and bottling, all without bravado or fanfare. In 2000 she became president of the Côte-de-Brouilly appellation, a position of respect and importance among peers. It's small wonder then that she is affectionately referred to as "La Patronne de la Côte," or the Boss of la Côte.
View all Domaine Chanrion 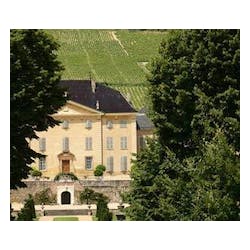