Ship "12" Free when you mix or match a 12 bottle case! more...
Domaine Chantepierre Tavel Rose 2018 ships free when purchased by the 12 bottle case! — Fill a 12 bottle case with this item or any of our other 400+ eligible free shipping items and that case ships for free! Note that there is no limit to the number of cases you can have shipped for free so long as they are filled with eligible "Ship 12 Free" items.
Wine Enthusiast 91
"Initially restrained and mineral, this pale-ruby ros seems to intensify in fruit concentration, shifting from shades of crisp raspberry to plush, juicy red cherry and plum. Dry and full bodied in style, it's a penetrating wine structured by fine, integrated tannins and brisk acidity. Enjoy now2022." Best Buy

Domaine de Chantepierre is produced at the Cave de Vigneron de Tavel, from a vineyard owned by the President of the Cave Cooperative, Christian Padie. 50 ... read more

Domaine de Chantepierre is produced at the Cave de Vigneron de Tavel, from a vineyard owned by the President of the Cave Cooperative, Christian Padie. 50 Grenache and the rest a mix of Syrah, Cinsault, Carignan, Clairette, Picpoul, Bourboulenc.

Tavel is an unique wine which follows a vinification totally different from all other ros wines, which is closely related to a red wine vinification : with long macerations from 48 to 72 hours. After pressing, a 10 to 15 days fermentation is led at low temperatures (55-57F).

View all from Domaine Chantepierre 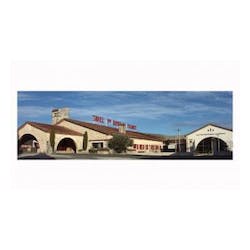 Domaine de Chantepierre is produced at the Cave de Vigneron de Tavel, from a vineyard owned by the President of the Cave Cooperative, Christian Padie. The Cave de Tavel represents 85 growers, which accounts for almost half of the production in the appellation. In addition to Tavel the Cave also produces wines from Cotes du Rhone, Cotes du Rhone Villages, and Lirac. Paul Sanches is the head winemaker.