$8.95
This value-priced chardonnay tastes crisp and bright. It comes from the western Loire Valley, an unexpected place for this Burgundy grape variety, and is made in a fresh, unoaked style, nothing like the famed (and costly) Burgundy crus. Though unconventional, its delicious, with fruit flavors that echo pears and apples, and an enticing hint of minerality beneath the surface.-Winemaker Notes

This value-priced chardonnay tastes crisp and bright. It comes from the western Loire Valley, an unexpected place for this Burgundy grape variety, and is made in a fresh, unoaked style, nothing like the famed (and costly) Burgundy crus. Though unconventional, its delicious, with fruit flavors that echo pears and apples, and an enticing hint of minerality beneath the surface.-Winemaker Notes

In 1978, just after purchasing Chteau de la Ragotire, the Couillaud brothers also purchased an estate on a beautiful hillside in the Loire Valley with a schist terroir. Part of the plot still needed to be planted, and Bernard Couillaud was curious about which varietals would do well in this area, where the two dominant varietals were Melon de Bourgogne and La Folle Blanche. After some research, the Chardonnay grape piqued his interest due to its unexplored potential in a maritime region. He launched the project and immediately set out for Chablis to research and learn more about Chardonnay. Planting started in the spring of 1987 and, over the course of three years, 42-acres were planted on the hillside plot.

Soon after the project began, Danny Haas of Vineyard Brands became interested and wished to taste the final product. In 1990, after having tasted Bernier Chardonnay amongst several other wines from the brothers, he was convinced of its potential and Bernier was introduced to the market.-Winery Notes

View all from Domaine de Bernier 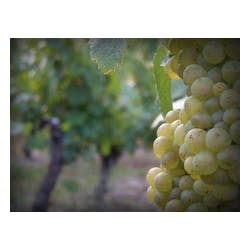 Bernier Chardonnay is an estate-bottled wine from the Couillaud brothers of Château de la Ragotière, sourced from vineyards just outside the appellation of Muscadet. They are separated only by a small road and the soil is almost identical to that of Muscadet, heavy clay with a little bit of chalk.

"This wine, made outside of Muscadet by one of that appellation's high quality producers, the Couillauds, does a fine job of impersonating a Chablis. There is enough Chardonnay character to please fans of that varietal, but the real hallmark of this wine is its crisp, elegant, steely, mineral, and citrusy personality. It is impossible to find a wine of this type from California, Australia, or South America. A refreshing, lively wine, it will drink beautifully with light fish dishes, or served as an aperitif."
Robert M. Parker, Jr, THE WINE ADVOCATE