View Cart / Checkout
Loading... Loading cart
Total:
—
0
Cart
Delivery
Search
Menu
Home » Wine » Red Wine » Beaujolais » Domaine Dupeuble Pere & Fils Beaujolais 2021
17%
OFF Sample Image Only
Domaine Dupeuble Pere & Fils Beaujolais 2021
$16.80 $13.95
The Dupeubles ferment their Beaujolais via carbonic maceration: whole, intact grape clusters are thrown into tanks and coated with carbon dioxide, setting off a chemical reaction wherein each berry essentially ferments from the inside out. The resulting wines have trademark aromas of juicy red fruit and spice, and can be gulped down effortlessly. This is what good Beaujolais is all about!

Tradition runs deep in the family, but each generation has also managed to add something new, including increasing the property. Today it is comprised of one hundred hectares, about forty percent of which is consecrated to vineyards. Strong advocates of the lutte raisonnée approach to vineyard work, they tend their vines without the use of any chemicals or synthetic fertilizers. The vineyards, planted primarily to Gamay, face Southeast, South, and Southwest, and about two thirds of the property is on granite-based soil. The grapes are harvested manually and vinified completely without SO2. The wines are not chaptalized, filtered, or degassed and only natural yeasts are used for the fermentation. The wines of Dupeuble represent some of the best values in the Beaujolais today and are widely regarded for their very high quality and eminently reasonable price.
View all Domaine Dupeuble Pere et Fils 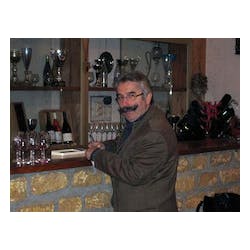