Wine Spectator 90
“Ripe, open and harmonious, this white shows peach, apple, lemon and subtle butterscotch flavors. Mouthwatering and tangy on the lingering finish. Drink now through 2021.” ~B.S.
About Domaine Faiveley
In 1825, Pierre Faiveley founded the firm that now bears the name Domaine Faiveley. At that time, the firm was a classic négociant, buying and selling wine. But from generation to generation, with a strong commitment to the quality of Burgundy's patrimony, the Faiveley family has purchased vineyards and is today among the largest owners of classified vineyards in the Côte de Nuits, Côte de Beaune and Côte Chalonnaise. On October 15, 2013, in a surprise announcement, Domaine Faiveley reported it had acquired 20 hectares of vines previously owned by Domaine Dupont-Tisserandot, which is based in Gevrey-Chambertin. All together, the firm now presently owns 123 hectares of vineyards among which 12 hectares are grands crus and 27, premiers crus.

The objective of the family today, led by Erwan Faiveley, is to increase the firm's holdings of great vineyards so that there can be complete control from vine to bottle across the entire range of wines. Along with this focus, Erwan Faiveley and General Manager Bernard Hervet have renovated the cellars, which now boast state-of-the-art barrel presses, custom-designed wooden vats and among the finest, air-cured oak casks available in the world. 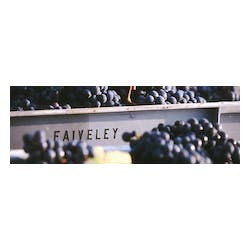