Ship "12" Free when you mix or match a 12 bottle case! more...
Domaine Guy Breton Morgon P'tit Max 2019 ships free when purchased by the 12 bottle case! — Fill a 12 bottle case with this item or any of our other 400+ eligible free shipping items and that case ships for free! Note that there is no limit to the number of cases you can have shipped for free so long as they are filled with eligible "Ship 12 Free" items.
p'tit Max comes from Breton's oldest (we're talking 130 years old) Morgon vines and is his most serious wine of all. You'll find no chemical additions in Breton's vineyards or winery. The wine is aged for ten months in used barrels from none other than Domaine de la Romane-Conti, and then bottle unfined and unfiltered. Basically, this is as natural as it gets, but you'd never know it! Crystal clear flavors here of ripe red ... read more

p'tit Max comes from Breton's oldest (we're talking 130 years old) Morgon vines and is his most serious wine of all. You'll find no chemical additions in Breton's vineyards or winery. The wine is aged for ten months in used barrels from none other than Domaine de la Romane-Conti, and then bottle unfined and unfiltered. Basically, this is as natural as it gets, but you'd never know it! Crystal clear flavors here of ripe red and black cherry fruit, cassis, mint, and clove. The palate is dense and concentrated, yes, but the wine drinks ethereally with feminine charm and elegance. Becky Wasserman once said in an interview to hold different kinds of fabrics when tasting different wines. Think velvet.

View all from Domaine Guy Breton 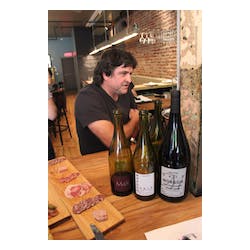 Guy Breton is known by his friends as P'tit Max--though he is anything but petit, by the way. He took over the family domaine from his grandfather in 1986. Until that point, the family was selling their fruit to the large cooperative wineries which dominated the region and were gravitating towards a uniform style. The rise of imported yeast cultures to impart flavor and aroma, the use of high-tech carbonic maceration, and the widespread commercialization of Beaujolais Nouveau debased the region's reputation, and Beaujolais came to be seen as one-dimensional, lacking any expression of the native terroir. Following the example of traditionalist Jules Chauvet, Guy and three other local vignerons, Marcel Lapierre, Jean-Paul Thévenet, and Jean Foillard, soon hoisted the flag of this back-to-nature movement. Kermit dubbed this clan the Gang of Four, and the name has stuck ever since. The Gang called for a return to the old practices of viticulture and vinification: starting with old vines, never using synthetic herbicides or pesticides, harvesting late, rigorously sorting to remove all but the healthiest grapes, adding minimal doses of sulfur dioxide or none at all, and refusing both chaptalization and filtration. The end result allows Morgon to express itself naturally, without make-up or plastic surgery: rustic, spicy, loaded with schist minerals and at the same time, refreshing and deep-down delicious.

Breton's domaine is comprised of just over four hectares (10.6 acres), most of which lies in the appellation of Morgon, above the village of Villié-Morgon. He supplements his own harvest with purchased fruit from surrounding appellations, enabling him to vinify a diverse portfolio of Beaujolais crus. His own vineyards, which exceed a century of age in some parcels, are located in the Morgon climat "Les Charmes", primarily in the high-altitude lieu-dit "Saint-Joseph," where slow ripening allows for low alcohol and great freshness in the wines. Max is among the first in the region to start picking each year, cooling down his harvest and pressing before the end of fermentation to craft wines he likes to drink: bright, aromatic, low in tannin, and dangerously easy to quaff down to the last drop.