Vinous 88
"Bright ruby-red. Crushed blackberry and licorice on the nose, with inky and herbal nuances. Surprisingly sweet and creamy in the mouth; conveys an inky reserve but also noteworthy breadth. In a rather Old World style, finishing with sweet tannins and good chocolaty length."

This wine is produced with grapes from our best plots with low yields. The red wines go through a pre-maceration and fermentation and post maceration and aged in French oak barrels for 10 months.
About Domaine Jean Bousquet
A 1990 vacation in Argentina was all it took. For third-generation winemaker Jean Bousquet, it was love at first sight. The object of the Frenchman's desire: the Gualtallary Valley, a scenic, remote, arid terrain high in the Tupungato district of the Uco Valley in Argentina's Mendoza region, close to the border with Chile. Here, where the condors fly and not a vine in sight, Bousquet discovered his dream terroir, an ideal location in which to nurture organically-grown wines.

With altitudes ranging up to 5,249 feet, Gualtallary occupies the highest extremes of Mendoza's viticultural limits. Fast-forward to the present and wine cognoscenti recognize it as the source of some of Mendoza's finest wines. Back then, it was virgin territory: tracts of semi-desert, nothing planted, no water above ground, no electricity and a single dirt track by way of access. Locals dismissed the area as too cold for growing grapes. Bousquet, on the other hand, reckoned he'd found the perfect blend between his French homeland and the New World (sunny, with high natural acidity and a potential for relatively fruit-forward wines).

Bousquet's daughter, economist Anne Bousquet, and her husband Labid Al Ameri, a successful trader with Fidelity in Boston, found themselves increasingly drawn to the cause, including the opportunity it offered to put their shared philosophy on sustainability into effect. After a 2002 trip to Argentina, the couple began to invest in Domaine Bousquet. In 2005, Al Ameri joined his father-in-law full time, helping with the construction of the winery. Anne continued her work as an economist, before joining the company in 2008. In 2009, the couple moved to Tupungato full-time, assuming full ownership of Domaine Bousquet in 2011.

Nowadays, Domaine Bousquet produces 4 million liters a year and export 95% of it´s volume to more than 50 countries. With our own import companies in the USA, Europe, and Brazil, Domaine Bousquet currently ranks in the top 20 Argentine wineries in terms of exports and is the leader in organic wine.
View all Domaine Jean Bousquet 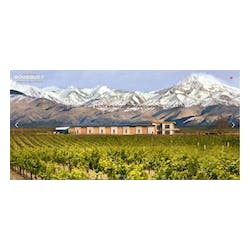