Ship "12" Free when you mix or match a 12 bottle case! more...
Domaine Les Pallieres Au Petit Bonheur Rose 2020 ships free when purchased by the 12 bottle case! — Fill a 12 bottle case with this item or any of our other 400+ eligible free shipping items and that case ships for free! Note that there is no limit to the number of cases you can have shipped for free so long as they are filled with eligible "Ship 12 Free" items.
While this item isn't currently available:
This historic property was, for decades, a solid source for traditional Gigondas, but consistency was always an issue until it was purchased by the Brunier family (Domaine du Vieux Telegraphe) and their longtime American importer, Kermit Lynch. The teams focus on improving the viticultural and winemaking work here has paid off big time, as their wines must be counted among the best of the appellation and, in fact, the entire southern Rhone Valley. From Gigondas ... read more

This historic property was, for decades, a solid source for traditional Gigondas, but consistency was always an issue until it was purchased by the Brunier family (Domaine du Vieux Telegraphe) and their longtime American importer, Kermit Lynch. The teams focus on improving the viticultural and winemaking work here has paid off big time, as their wines must be counted among the best of the appellation and, in fact, the entire southern Rhone Valley. From Gigondas Maintains Its Tempo (Feb 2020) by Josh Raynolds

Au Petit Bonheur Les Pallieres is the only rose wine produced by the Brunier family in France. It is a blend of grenache, cinsault and clairette grapes, pressed straight after hand picking and then fermented together and matured in oak, in 650-litre demi-muids. It is bottled at the end of the winter after harvesting; slight filtration confers a crisp, brilliant appearance. A consummate mealtime rose; it captures the freshness, elegance and fullness of the lieu-dit Les Pallieres.. 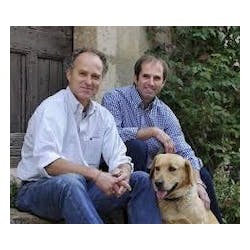