Ship "12" Free when you mix or match a 12 bottle case! more...
Donnhoff 'Hollenpfad GG' Riesling 2020 ships free when purchased by the 12 bottle case! — Fill a 12 bottle case with this item or any of our other 400+ eligible free shipping items and that case ships for free! Note that there is no limit to the number of cases you can have shipped for free so long as they are filled with eligible "Ship 12 Free" items.
James Suckling 97
"Very complex wild herb and berry nose with a touch of fresh pineapple. Concentrated and succulent, yet this remains so bright, the minerality building to a huge climax that is still so vibrant. Enormous aging potential. From organically grown grapes with Fair'n Green certification. Drink or hold."

James Suckling 97
"Very complex wild herb and berry nose with a touch of fresh pineapple. Concentrated and succulent, yet this remains so bright, the minerality building to a huge climax that is still so vibrant. Enormous aging potential. From organically grown grapes with Fair'n Green certification. Drink or hold."

Wine Advocate 94
"From 40+-year-old vines on weathered sandstone soils, the 2020 Hllenpfad Im Mhlenberg GG opens with a clear, fresh and elegant bouquet of ripe, bright fruits. Full-bodied, intense and mineral on the palate, this is a pure fresh, straight and fruity yet also complex and sustainable Riesling with a long and tensioned, clear and polishing finish with lingering salinity. The 2020 has a lot of expression but is still youthful and will gain complexity, finesse and elegance as it ages in the bottle. 13% alcohol. Tasted at the domain in July and again six weeks later in Wiesbaden in August 2021."

Famous, steeply sloping vineyard in a small side valley of the middle section of the Nahe River. The Hllenpfad (Path to Hell) name is an old one, likely referencing both the vineyards steep slope as well as the unique color of the red sandstone. The surrounding landscape is bathed daily in the rich, warm light of the evening sun as it reflects off the hillsides distinctive red soil. Its also not hard to imagine that the word Hell might have been uttered by many a winegrower after a particularly laborious day on these steep slopes. The weathered warm sandstone of the Rotliegend strata lends the wines their inimitable character. Grapes grown here tend to be very small with intense, nuanced aromas; the resulting wines are elegant with a spicy mineral fruit and excellent aging potential.

The loess loam soil of the Krtenpfuhl vineyard is notable for its high share of gravelly quarzite. Between the stony ground and its southern aspect, this neighbor to the Kahlenberg is known for warm soils and early flowering of the vines year after year. The loess loam substrate retains water well, ensuring the vines have sufficient moisture even in drought years. Vines growing in this type of pebbly soil tend to produce small berries with delicate aromas, a lively acidity and a long hang time

The Estate
The Dnnhoff family first came to the Nahe region 250 years ago, establishing a traditional farm in the village of Oberhusen an der Nahe, which included livestock and vegetable gardens in addition to some grape growing. Oberhusen and this part of the Nahe river valley is very pastoral; it feels far away from the relative hustle and bustle of the Rheingau and wine tourism. The countryside is serene and beautiful, marked by steep hillside vineyards in the succession of villages following the river from Norheim to Niederhausen, through Oberhusen, ending in Schlssbockelheim.
The estate was started by Helmut Dnnhoffs grandfather, Hermann, in the 1920s. Helmut took over from his father, Hermann Jr. in 1966; at that time there were only four hectares under vine and still quite a bit of farmland, which was rented out. In 1971, the farmland was sold and Helmut turned his full attention to producing quality wine.

Helmut is a very instinctive winemaker with a natural touch that hes clearly passed on to his son Cornelius, who joined him at the winery 2007. The Dnnhoffs believe in craft and workmanship with the understanding that winemaking alone cannot bring quality; it can only retain the available quality. In the 40+ years that have passed since Helmut began his work some things have changed and shifted, but the commitment to excellence and transparency above all has remained constant from one generation to the next.

The Estate has grown to 25 hectares but both father and son feel that this is as large as they want to be; more growth would mean less time in the vineyards and cellar, where they feel most at home and in their element. Cornelius is as thoughtful as his father and the two share the same view on winemaking, viticulture, and taste in wine; balance and Das ganze ding muss klingen The whole thing must be sound are at the center of their philosophy. 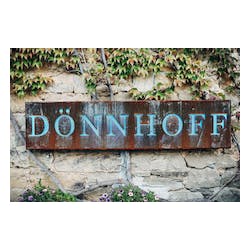