Ship "12" Free when you mix or match a 12 bottle case! more...
Dutton-Goldfield Dutton Ranch Pinot Noir 2014 ships free when purchased by the 12 bottle case! — Fill a 12 bottle case with this item or any of our other 400+ eligible free shipping items and that case ships for free! Note that there is no limit to the number of cases you can have shipped for free so long as they are filled with eligible "Ship 12 Free" items.
While this item isn't currently available:
Wine Enthusiast 91
"This wine is put together from multiple vineyard sources, including the well-known Morelli Lane and Widdoes, all farmed by the Duttons. Larger in production than many of the vineyard-designates, it offers baked bread and juicy overtones of cranberry-raspberry layered atop luxuriously toasted oak. It'll show well at the table."

The 2014 Pinot Noir Dutton Ranch is from the iconic site that was first planted in 1964 and became one of the top single-vineyards ... read more

Wine Enthusiast 91
"This wine is put together from multiple vineyard sources, including the well-known Morelli Lane and Widdoes, all farmed by the Duttons. Larger in production than many of the vineyard-designates, it offers baked bread and juicy overtones of cranberry-raspberry layered atop luxuriously toasted oak. It'll show well at the table."

The 2014 Pinot Noir Dutton Ranch is from the iconic site that was first planted in 1964 and became one of the top single-vineyards in the Russian River. Crisp pomegranate, red apple-skin notes, cherries and a hint of strawberries make an appearance in the fruit-driven, finely structured, but pleasing, slightly lighter and more elegant and style Pinot Noir compared to the Emerald Ridge Vineyard. This is a pretty, Côte de Beaune-like Pinot Noir.

View all from Dutton-Goldfield Winery 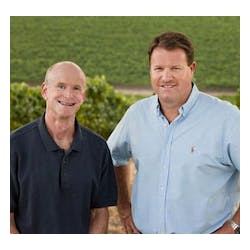 Dutton-Goldfield Winery began with a handshake in a vineyard in 1998, when longtime colleagues and friends Steve Dutton and Dan Goldfield recognized a shared vision between them--to craft wines that express the personalities of their cool-climate vineyards, and which they'd enjoy drinking at their own dinner tables.

A fifth-generation farmer, Steve grew up with a love of driving tractors, and without any doubt about his future career. His father, Warren Dutton, had begun growing grapes in the western reaches of Russian River Valley in the mid-1960s, at a time when most people thought the area was too cool to grow fruit for quality still wine. Steve started working with his father when he was five years old, and joined Dutton Ranch full-time in 1987. Today, along with his mother and brother, he manages the family business, which has grown from its original 35-acre home shop vineyard to over 80 separate vineyards comprising more than 1,000 acres throughout western Russian River Valley.

After graduating from Boston's Brandeis University, Dan headed west to begin a career in research chemistry, with a few detours for skiing and hiking on the way. Always an outdoor enthusiast, the life of lab work was quickly replaced with a dream of winemaking when his brother turned him on to the 1969 Burgundies. Dan entered the University of California at Davis, graduating with an M.S. in Enology in 1986. He gained knowledge on the job with stints at Robert Mondavi Winery and Schramsberg as well as winemaking in Portugal for two years. He found his passion in Pinot Noir and Chardonnay, first as the winemaker at the Burgundian-focused La Crema Winery, and then at Hartford Court, which was created under his direction. Dan's appreciation for the beauty of the extraordinary landscape around our home is reflected in his winemaking.