"The 2018 red version of Bone-Jolly is much like its immediate predecessor, perhaps ever-so-slightly more so. As the vines age (Some of them are now approaching 13, conveying an authority of flavor to ... read more


"The 2018 red version of Bone-Jolly is much like its immediate predecessor, perhaps ever-so-slightly more so. As the vines age (Some of them are now approaching 13, conveying an authority of flavor to the wines they produce, which, if we do our work properly, will just continue to improve.) each year brings to the wine a bit more of the emerging personality of the vineyard, and the expression Gamay has to offer in its particular location.

The growing season in 2018 was preceded by a moderately cool Winter, with rainfall only about 70% of normal. It began just a bit on the early side, and was, overall, slightly warmer through July and the first part of August, cooling down nicely toward the end, and giving the grapes a fairly smooth landing at the end of August and into very early September.

The fruit is sourced from Barsotti Ranch, at a bit below 3,000 feet elevation, just a little to the North and East of Placerville. The vines are grown in soil that is largely decomposed granite. 2018 was the 12th harvest from Barsotti.

Picked in 2018 at Barsotti ripened a bit more slowly than in previous years, and since pHs were, as usual, quite low, I waited just a bit longer this time around, before deciding to pick, and I think it made for a bit more tender wine, both flavor-wise and texturally. Picking began on August 31, and was completed on the 5th of September. Grapes were picked into half-ton bins, destemmed and returned to bins to ferment; skins punched down twice daily, morning and evening. When the wine was dry, it was pressed into stainless, where it underwent spontaneous malolactic ferment, and aged on primary lees for several months before being racked in December. Bottling was done in the second week of February." ~ Steve Edmunds

View all from Edmunds St John 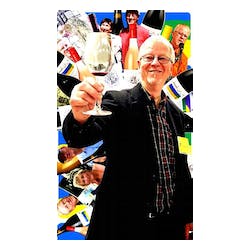 Although you would undoubtedly get a humble, soft spoken reply if you tried to tell him so, Steve Edmunds is one of the greatest winemakers in California and, frankly, the world. This is all the proof you need that the United States can produce incredible wines. Whether we're talking about his classic Syrahs and Rhône blends or his more recent ventures into Gamay and atypical white blends, this is the real deal. And now, with almost three decades of practice, his wines are as remarkable as ever. He'll never make a blockbuster fruit-bomb, and critics don't always give him due attention, but Steve is still out there making the uncompromising wines he always has. The winery started in 1985 when Steve and his wife, Cornelia St. John, bought a few tons of grapes from some old vineyards and produced their first vintage.

The wines were Rhône inspired: Syrah, Mourvèdre, and a Châteauneuf-du-Pape style blend. Over the years Steve has worked with many other varietals but Rhône blends and Syrahs have always been the heart of Edmunds St. John. Little has changed in Steve's winemaking since that first vintage, he starts with quality fruit from great sites and, preferably, older vines. In the cellar he keeps a light touch, using hand punch-downs and going easy on the oak. For the Rhône reds, Steve ferments them in one to six year old barrels and puncheons; for the whites and Gamay it's all stainless steel.

The resulting wines, while delicious young, are incredibly age-worthy; they almost seem like they could last forever, growing only more complex and surprising. Even his Gamays and Whites can age for ten years or more with compelling results. They are fascinating to taste year after year; the evolution of just a few years reveal a whole new dimension to a wine you thought you had already figured out. It is remarkable to still be surprised by a winemaker after almost thirty years, but Steve never fails to challenge what we believe we already know. Surprises are an underappreciated quality in wine, and we're fortunate to have someone out there who hasn't forgotten that. On some bottles Steve claims to bottle by "Blind Luck and Intuition," and it's possible that it's true. It has, however, been a very long streak of luck and a lot of very good intuition.