The exact date of the emergence of Egri Bikavér is shrouded in mystery. One thing is certain; the word Bikavér (bull's blood) was recorded as early as the beginning of the 19th century. Under the name Bikavér, full-bodied red wines were sold, not only in Eger and Szekszárd but other places as well. Legends grew up around the name, which tied it to the 1552 siege of Eger as related by Gárdonyi Géza. In its present form, also accepted by the public, Egri Bikavér is associated with the name of Gr?ber Jen?, Eger vigneron. Sugár István (1981) writes: 'I have searched different sources for the composition of grape types constituting bull's blood. The earliest record dates back to 1912, when, in addition to kadarka, I have found blue frank, cabernet and merlot'.

Our contemporary vignerons and winemakers have been refining the conditions of the production, name, classification and control of this wine for the past two decades. The result of this activity is that Egri Bikavér became the first quality wine in Hungary's history to be produced in a specified region. (Egri Bikavér Regulation of 1997)

At present, Egri Bikavér is produced in accordance with a regulation designating 3 tiers of quality: classicus, superior and grand superior. The product description contains the rules of yield restriction, fermentation sur marc, aging in barrels and bottles, as well as the marketing and trading of the wines, for the different tiers.

Egri Bikavér is a Kékfrankos-based dry red wine blend, ranging from garnet red to deep ruby, with flavours and aromas presenting rich, spicy and fruity characteristics, without a tannin accent. Aging and fresh fruit aromas are both characteristic of the wine; its complexity is well illustrated by the fact that the characteristic feature of the wine is that no single grape type can dominate the wine in question. Due to the riper, more concentrated grape produce, as well as the extended aging in barrels and bottles, Superior and Grand Superior wines have marked aromas of mellowing, lasting flavours, full body and a long shelf-life with minerality and ideas in harmony with the production areas (sites). The difference between them is usually manifested in the fullness and duration of the aroma. 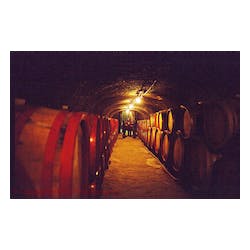 No questions posted yet about this item.
"A hearty wine with a cool name."
Posted byJohn on Oct 26, 2022Verified Purchase
Great value priced everyday wine
"We love this Hungarian red as an everyday type of wine. As wine prices have crept up over the years, it is easy to spend 18 to 20 dollars (esp. in Manhattan where prices tend to be higher at wine shops) on an everyday wine type of wine from France, Italy, Spain, etc.; we love this one as a tremendous value alternative! It is dry and light bodied with some nice fruit. I disagree with the winery notes that it goes with "bold foods" like meat, I find it light enough to go with just about anything and totally fine to drink on its own. Benefits from a little breathing, in glass is fine... or decanter. Sometimes we end up serving this at the end of a dinner party when all of the nicer wine is gone, and our friends always love it. It's also interesting for them because many people are unfamiliar with Hungarian wines! We used to buy this at a shop in Chelsea, but we moved... so THANK YOU Empire Wine for your super fast shipping service and totally reasonable shipping charges! It's cheaper to order from Empire than to put a case in a taxi to get it home! Highly recommend this wine! Cheers!"
Posted byHeather on Dec 1, 2020Verified Purchase
wine from Hungry
"This is a great red wine that's just a little dry. Very enjoyable and and excellent taste"
Posted byJames on Aug 1, 2017Verified Purchase
private review
Posted bycustomer on May 19, 2020Verified Purchase
"We poured it down the sink. If the other reviews are correct, we had a bad bottle. .If they're not, then they are way too easily satisfied. We'll stick to Tokay, from Hungary, henceforth..."
Posted byLoring on Oct 10, 2022Verified Purchase
Subscribe to our newsletter!