Item Sold Out
Notify me when this item is available
Wine Advocate 91
"Regularly released, the NV Manzanilla I Think, Saca de Octubre de 2014 is the autumn bottling of this Manzanilla from Sanlúcar which fermented in stainless steel at controlled temperature and aged in a solera system for some four/five years before bottling. This has the freshness of the recent bottling, a tad less flor-infused than the earlier bottling, though is very balanced and pleasant, true to its origin."~LG
Item ID: #16471
Winery: Equipo Navazos
Category: Port, Madeira & Sherry
Size: 750mL (wine)
Closure: Cork
Share this item on FacebookFollow Empire Wine on TwitterFollow Empire Wine on Pinterest

Wine Advocate 91
"Regularly released, the NV Manzanilla I Think, Saca de Octubre de 2014 is the autumn bottling of this Manzanilla from Sanlúcar which fermented in stainless steel at controlled temperature and aged in a solera system for some four/five years before bottling. This has the freshness of the recent bottling, a tad less flor-infused than the earlier bottling, though is very balanced and pleasant, true to its origin."~LG

View all from Equipo Navazos 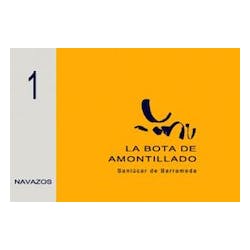 Equipo Navazos is not a Bodega. It is a group of Spanish sherry lovers led by wine writer Jesús Barquín and Eduardo Ojeda, technical director of Grupo Estévez.

In December 2005 this private group found several dozens of remarkable barrels of exceptionally fine 20 year old Amontillado. They realized that it was a shame that so many brilliant sherry butts were lying aroung in bodegas, often with low volumes that are commercially not interesting to be bottled separately, but too good to be part of a large-scale solera blend. Together with 30 or so friends and professionals, they split the bottles titled La Bota de Amontillado.

The following year, two more casks were bottled. Each release in the La Bota series is chronologically numbered. It was not until 2008 that Equipo Navazos releases were made available to the public. La Bota de Fino, Macharnudo Alto N°7 caused quite a stir when the Guia Peñin (the Michelin guide of Spanish wine) called it the Wine of the Year. Commercial success was never the primary objective, it is the passion for the regional wines that drives this project and the fact that this is a unique opportunity to show the world just how great sherry can be.

01Equipo Navazos sources its wines from different bodegas around the Jerez area. A handful of houses seem to be preferred: obviously Valdespino and La Guita (both owned by the Grupo Estévez), as well as Rey Fernando de Castilla, Miguel Sánchez Ayala and Pérez Barquero. All barrels are selected for their quality and distinctive character, and they are bottled unfiltered (or rather with the lightest filtering possible), saving as much of the complexity and full body as possible. By doing so they are at the forefront of the en rama revolution that is currently taking place in the sherry world.

Stressing on minimal filtering is not the only fresh idea of Equipo Navazos. They are also introducing a kind of transparency that is rather new in the sherry world. They tend to mention the Bodega, the date of withdrawal, as well as the number of casks used, their yield, the geographical area of grape production and sometimes much more specificities on their website, where every wine has its own page. As an independent bottler of sherry, they've taken the quality and the individual appreciation of sherry to the next level.

Since 2009, the Portuguese winery Niepoort joined Equipo Navazos to elaborate unfortified white wines, made of 100% Palomino Fino from one of the Albariza vineyards in Jerez. The wine was produced by the same winemaking traditions of two centuries ago, with grapes being fermented in butt, only with indigenous yeasts, and aged under flor for four to five months. They have also bottled dry white wine called Ovni, made of Pedro Ximénez grapes by Pérez Barquero, sparkling wines made by Colet in the DO Penedés, as well as brandy.

By the way, a navazo is a typical kitchen garden in Sanlúcar de Barrameda, close to the shore. Nowadays, due to the urban expansion, they have become rare.