Far Niente Chardonnay is a blend of superlative Napa Valley vineyards, located in Coombsville, a cool growing region nestled in the rolling countryside and protected by the hills east of the city of Napa. Coombsville offers the characteristic climate of Carneros, with less wind, along with deeper, well-drained gravelly loam and volcanic ash soils. The combination of these spectacular vineyards results in the subtle, tropical flavors, complex aromas and uncommon richness that have long been associated with Far Niente Chardonnay. " ~ Winery notes
About Far Niente
Far Niente was founded in 1885 by John Benson, a forty-niner of the California gold rush and uncle of the famous American impressionist painter, Winslow Homer. Benson hired architect Hamden McIntyre, creator of the former Christian Brothers winery--now the Culinary Institute of America at Greystone--to design the building. Constructed against a hillside in western Oakville, Far Niente functioned as a gravity flow winery, gently moving the grapes through each stage of production.

Nineteen eighty-two marked the return of winemaking to Far Niente, with the harvest of the winery's first Cabernet Sauvignon. Chardonnay was also produced at the winery for the first time that year; the 1979, '80 and '81 vintage wines were made at an offsite location. Today, the winery continues to focus on producing only the two varietal wines.
View all Far Niente 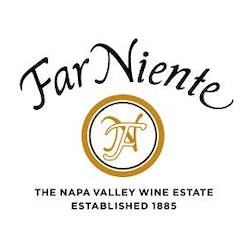