Vinous Media 89
"The 2019 Chianti Colli Senesi is laced with sweet red berry fruit, mint, spice, tobacco and dried flowers. This is an especially perfumed style of Chianti from the Colli Senesi."~Antonio Galloni

Vinous Media 89
"The 2019 Chianti Colli Senesi is laced with sweet red berry fruit, mint, spice, tobacco and dried flowers. This is an especially perfumed style of Chianti from the Colli Senesi."~Antonio Galloni
About Farnetella
"In 1981 the owners of Felsina purchased the historic estate of Castello di Farnetella. Located about 30 minutes southeast of Castelnuovo Berardenga, this property should be considered a monopole cru among the otherwise uninspired appellation of Chianti Colli Senesi. The property and village of Farnetella encompasses a large hill, the top of which is near 560 meters in elevation. It has a mix of soils on it including sand, clay and limestone. While Farnetella is well-suited to Sangiovese, which makes up a majority of its plantings, there are also plots of Merlot, Syrah, Pinot Noir and Cabernet Sauvignon.

The vineyards at Farnetella are all hand harvested and are farmed with the same attention and precision as those at Felsina. Organic, sustainable agriculture is practiced and they have incorporated some of the principals of biodynamics as well. Also, as at Felsina, the entire production is made from estate fruit. 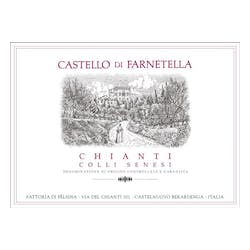 No questions posted yet about this item.
"This is a nice, simple, and soft Chianti that I am sure a lot of people will enjoy. The reason why I am not giving a higher rating is because I prefer higher acidity."
Posted byDaniele on Nov 12, 2022Verified Purchase
Subscribe to our newsletter!