"The Biker" came from the West Side of Paso Rolbes with a vengeance. Riding off the hills of Westside Paso from the Dusi and Preston Zin vineyards. where rocky, calcareous soils result in low yield vines, producing fruit of intense concentration.
A splash of Mouvedre leads an extra kick in the mid-palate. The Biker has blackberry, anise spice and vanilla on the nose. Rich, black fruit and spice, long in the mouth lingering to a vanilla oak finish. A massive and in-your-face Zin - taking no prisoners.

View all from Four Vines 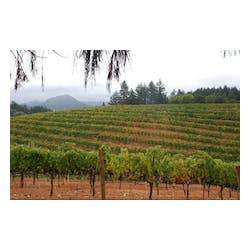 California's Central Coast is a vast, rugged landscape stretching from Santa Barbara north to Monterey Bay. It's wild country with a gorgeous coastline and few towns. Wide open with fertile farming soil and abundant ranchland, this place attracted more than just farmers and cowboys it also attracted artists, rebels, seekers and bon vivants from the Bay Area and the Los Angeles sprawl. The confluence of their unique personalities put a stamp on the burgeoning wine region and today, rule-breaking and non-conformity are celebrated values. Four Vines honors the anti-establishment views of the Central Coast's eccentric personalities. We make interesting wine, for interesting people.