View Cart / Checkout
Loading... Loading cart
Total:
—
0
Cart
Delivery
Search
Menu
Home » Wine » White Wine » Loire White » Francois Chidaine 'Clos de la Grange' Sauvignon Blanc 2020
Sample Image Only
Francois Chidaine 'Clos de la Grange' Sauvignon Blanc 2020
Ship "12" Free when you mix or match a 12 bottle case! more...
Francois Chidaine 'Clos de la Grange' Sauvignon Blanc 2020 ships free when purchased by the 12 bottle case! — Fill a 12 bottle case with this item or any of our other eligible free shipping items, and that case ships for free! Note that there is no limit to the number of cases you can have shipped for free so long as they are filled with eligible "Ship 12 Free" items.
"Year in, year out, one of the finest Sauvignon Blanc values coming from the Loire Valley. Rockstar Loire producer Francois Chidaine makes this custom cuvee especially for Polaner Selections. It boasts notes of citrus and stonefruit on the nose, followed by lovely acid and mineral undertones on the palate. An impressive wine and an exceptional value, this will give many a Sancerre a run for the money at a fraction of the price!"~Distributor Notes

store shelf 12 Free
Item Sold Out
Winery: Francois Chidaine
Category: Loire White
Size: 750mL (wine)
Alcohol by vol: 13.5%
Closure: Cork
Item ID: #42327
Location at store: 95d
Region: France » Touraine
Other Similar Items
$9.95
Domaine de Bernier Chardonnay 2020
$16.95
Pascal Jolivet 'Attitude' Sauvignon Blanc 2021
$16.95
Domaine du Salvard Cheverny Blanc 2021
$12.95
Domaine Saint Roch Sauvignon Blanc 2021
$9.95
Chat de la Chesnaie Muscadet Sur Lie 2021
$12.95
Hugel Gentil Alsace Blend 2020
$18.95
Domaine de Chevilly Quincy Cuvee Zoe 2021
$18.95
Cailbourdin 'Les Racines' Pouilly-Fume 2020
$19.95
La Craie Pouilly-Fume 2021
$13.95 D 97
Matilda Nieves Mencia 2020
$14.95 JS 96
Pewsey Vale Dry Riesling 2021
$11.95 D 95
Chateau Bourdieu No. 1 Bordeaux 2019
Information
Questions
Size / Vintage Options
Reviews
Item Description
"Year in, year out, one of the finest Sauvignon Blanc values coming from the Loire Valley. Rockstar Loire producer Francois Chidaine makes this custom cuvee especially for Polaner Selections. It boasts notes of citrus and stonefruit on the nose, followed by lovely acid and mineral undertones on the palate. An impressive wine and an exceptional value, this will give many a Sancerre a run for the money at a fraction of the price!"~Distributor Notes
About Francois Chidaine
"Montlouis is an appellation of 400 hectares located directly across the river from Vouvray. In fact, until it was granted AOC status in 1937, Montlouis wines were produced under the Vouvray appellation. The soils in both places are quite similar: sandy clay on a base of tuffeau. Some say that a slightly higher percentage of sand and pebbles in the Montlouis soils makes the wines a bit leaner than the wines of Vouvray. For us, this trait adds to the charm of Montlouis's sec wines, giving them a lively crispness on the palate and outstanding minerality.

If you have the pleasure of visiting the newly renovated and expanded domaine, don't miss stopping by La Cave Insolite, the Montlouis wine shop run by Francois' wife and force of nature Manuéla Chidaine. She has a well curated selection of wines from the Loire, both old guard and up and comers, as well as the 'best of the best' of small growers from regions throughout France. The sky is the limit with this dynamic duo."
View all Francois Chidaine 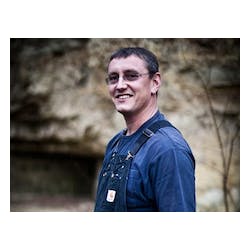