Its a mouth-revving Riesling with a bite that sings with mountain-stream purity. Its flavors dart all over,  ... read more

Its a mouth-revving Riesling with a bite that sings with mountain-stream purity. Its flavors dart all over, quartz-like acidity coming right at you, bold and unapologetic. A sprightly nose of citrus fruits, lime zest and white lilies. The off-dry palate is white nectarines, a refreshing zip of limes, and minerals. Itll pair perfectly with sweet and spicy dishes alike. ~winery notes

Frisk is represented by an eclectic team of winemakers located in Australia and California who believe wine is for enjoying. Period. Full stop. They dont try to baffle you with terms youve never heard of or flavors that have no business in a bottle of wine. They make delicious wine with a unique prickle to it. If it tastes a bit like nectarines, theyll tell you this tastes a bit like nectarines. If it tastes a little like limes, or minerals? Thats what theyll say. Frisk wines are grown in decidedly different climes. High in the Alpine Valleys of Australia. Places a little cooler, or sunnier, or steeper, or more obscure than the places one would expect winemakers go, because Frisks Brilliantly Conceived Master Plan consists of Being Where The Grapes Grow Best and making wines that reflect that.
About Frisk Winery
Made by a team of maverick winemakers hailing from the far corners of Victoria's cool-climate regions, Frisk is crafted by seasoned hands. Harvested in the chilly eve and delivered to the winery in pristine condition, prized free-run Riesling juice is fermented with canny yeasts that ensure the wine is sporting plenty of aromatic verve along with a low 8% alcohol. And the prickle? A gentle spritz produced by those clever yeasts, captured to deliver a tickle that will rouse your palate. It's downright Frisky.
Nestled into the Northern foothills of the Victorian Alps, the Alpine Valleys harbor a handful of dogged grape growers whose ancestors arrived in the 1850s after a less-than-comfortable boat trip from Italy. With lofty slopes climbing to 2000 feet, vineyards are snow clad in winter and punch through clouds to nab a slice of sunshine during summer. Four valleys are created by the Ovens, Buffalo, Buckland and Kiewa rivers, whose ancient flows dumped granite-based loam that the vines greedily nosh to produce flinty, minerally wines.
View all Frisk Winery 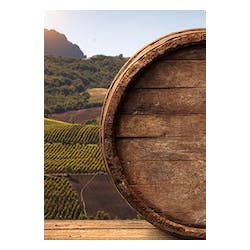 No questions posted yet about this item.
Posted byLaurel on Apr 17, 2022Verified Purchase
Subscribe to our newsletter!