View all from Fulkerson Winery 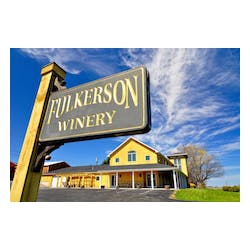 SAYRE FULKERSON (B. 1953)
Sayre Fulkerson graduated from Cornell University in 1975 with a degree in pomology (the study of fruit production) and worked at Glenora Cellars. In 1979 he bought the Jensen Juice plant from Glenora and began selling grape juice to home winemakers.

Sayre and his wife Nancy opened Fulkerson Winery in 1989; he now serves as Winemaker. They have continued to expand the farm's grape juice production, attracting a loyal and growing following of home winemakers.

STEVEN FULKERSON (B. 1985)
Steven Fulkerson represents the 7th generation of Fulkersons to work this land. He graduated from Cornell University in 2007 with a degree in viticulture and oenology (grape-growing and winemaking) and has been General Manager since 2015.

Steven and his wife Regina are proud parents to the 8th generation, Sarah Fulkerson, born October 2018.

"Had this patrticular brand when I attended a friend’s wedding in mid-state NY. I’m not a fan of the more bitter wines, they’re just not for me. Red Zep is sweet and delightful. I have ordered a half dozen bottles once a year for a few years now and will continue to do so in the future."

Perfect mix of sweet and dry

"Not to sweet..perfect sitting with friends by the bonfire"

"I buy a case around every 8-10 weeks. Can't keep enough on hand. Friends and family love it."