Tasting Notes
" Purple color, nose of black cherries and underbrush. Medium body, sweet and clean at first taste, should be opened after 2-3 years.

Mori now produces two Chiantis of extraordinary quality: The Chianti Normale and the Chianti Castelrotto. The regular Chianti is a blend of 95% Sangiovese and 5% Canaiolo aged in the traditional large oak casks while the "Castelrotto" Riserva is 85% Sangiovese and 15% Merlot aged in French-oak barriques. Vinification takes place in stainless-steel tanks. Both Chiantis are the very essence of Sangiovese, both elegant and concentrated at the same time.

In the Veronelli Guide, Daniel Thomases awarded the 2003 Castelrotto 91 points, writing that "the true flavors of Chianti...the wines of Giacomo Mori have them, above all in the exquisite wine that bears his name."

Vineyard Practices: Giacomo Mori is practicing organic. While copper and sulphur-based products are used, the winery never uses chemical fertilizers, insecticides, or herbicides. Leguminous plants (Vicia Faba) are sown on every other row between the vines. The plants are then mowed and tilled into the ground in order to provide green manure and natural Nitrogen. The soil is tilled between one vine and another on the row. Very low doses of SO2 are used to preserve the wines. 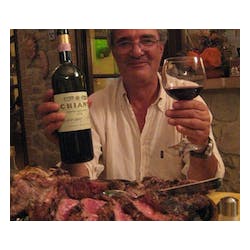