View Cart / Checkout
Loading... Loading cart
Total:
—
0
Cart
Delivery
Search
Menu
Home » Wine » Red Wine » Shiraz / Syrah » Glaetzer Anaperenna Shiraz/Cabernet 2017
32%
OFF Sample Image Only
Glaetzer Anaperenna Shiraz/Cabernet 2017
$95.99 $64.95
Ship "12" Free when you mix or match a 12 bottle case! more...
Glaetzer Anaperenna Shiraz/Cabernet 2017 ships free when purchased by the 12 bottle case! — Fill a 12 bottle case with this item or any of our other eligible free shipping items, and that case ships for free! Note that there is no limit to the number of cases you can have shipped for free so long as they are filled with eligible "Ship 12 Free" items.
Wine Advocate 97
I love what Glaetzer's inclusion of Cabernet brings to the 2017 Anaperenna Shiraz-Cabernet Sauvignon, giving it additional fragrance and length. Lifted aromas of mint, raspberries and dark chocolate mark the nose, while the full-bodied palate is rich and velvety but never heavy, framed by supple tannins that turn silky on the long, long finish. Showing great focus, energy and intensity, expect it to still be going strong in a decade. 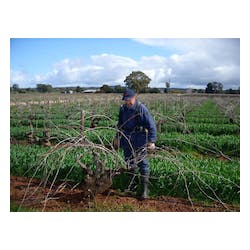