Connoisseurs' Guide 90
92% Pinot Noir; 8% Chardonnay. This engaging, nicely crafted Blanc de Noirs does an exceptionally nice job at being fruity and fresh and moderately yeasty all at the same time. It smacks mildly of juicy cherries while showing plenty  ... read more

Connoisseurs' Guide 90
92% Pinot Noir; 8% Chardonnay. This engaging, nicely crafted Blanc de Noirs does an exceptionally nice job at being fruity and fresh and moderately yeasty all at the same time. It smacks mildly of juicy cherries while showing plenty of creamy autolysis and is enlivened by perky acidity and a full, frothy mousse. It stands out from its similarly priced, large-production cousins and is an outand- out steal when found at a discount as it routinely is.

Wine & Spirits 90
This isn't complex, but something about its sweet, sunny fruit and gentle precision feels properly Californian. The texture is soft and polished, lasting on a clean chamomile scent that will keep you coming back for more.

Decanter 90
With more than 40 different Pinot and Chardonnay clones planted on the 138ha estate, this traditional-method sparkling (92% Pinot Noir) maintains an admirable consistency that sees fresh red fruit characters mingle with soft citrus and creamy vanilla. Plush and polished mid-palate, the finish has crisp lines and an engaging elegance.
About Gloria Ferrer
Gloria Ferrer was founded in 1982 by the Ferrer family as their primary venture into California winemaking. Owners of Freixenet S.A., one of the primarily Cava producers in Spain, they fulfilled the families lifelong dream of producing wine in the United States. Purchasing 156 acres of cattle ranch land, an additional 100 acres was acquired and production began.[4] The winery was named after José Ferrer's wife, Gloria. The couple continue to run the winery together to this day.

They began producing in 1986 and while primarily founded as a sparkling wine making venue, in the early 1990s they began producing still wine. Upon this decision, red wine producing facilities were built and the wine caves were expanded for storage of both types of production.

Gloria Ferrer's wine making mission is: To capture the full expression of the distinctive Carneros terroir in wines made to pair perfectly with food.
View all Gloria Ferrer 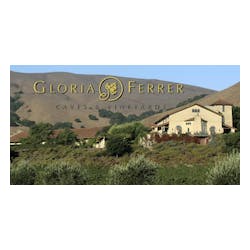