View Cart / Checkout
Loading... Loading cart
Total:
—
0
Cart
Delivery
Search
Menu
Home » Wine » Red Wine » Italian Red » Graci Etna Rosso 2020
22%
OFF Sample Image Only
Graci Etna Rosso 2020
$29.39 $22.95
Ship "12" Free when you mix or match a 12 bottle case! more...
Graci Etna Rosso 2020 ships free when purchased by the 12 bottle case! — Fill a 12 bottle case with this item or any of our other eligible free shipping items, and that case ships for free! Note that there is no limit to the number of cases you can have shipped for free so long as they are filled with eligible "Ship 12 Free" items.
James Suckling 93
"A pretty nose of roses, strawberries and garden herbs. Full-bodied with fine tannins and very precise intensity. Fruity. There’s a steely undertone here. Lovely. Drink or hold."

"100% Nerello Mascalese (Organic; 14% alc; Soil : Dark-brown, of volcanic origin, rich in skeleton, between sand-rich and sandy francs, ph neutral, not calcareous, from rich to very rich in iron and with high nitrogen content; 18 months in concrete tanks and large oak tini with spontaneous development of malolactic fermentation)" ~ winery notes
About Graci
Alberto Graci is one of Etna's iconic winemakers. After studying economics in Milan, he returned to his hometown of Catania with the vision of returning to his family's roots in Sicilian viticulture. After a careful study of all areas on Mt. Etna, Alberto chose to build his winery in on the north slope of the volcano at Passopisciaro, an area where viticulture dates back several thousand years. His vineyards sit at an altitude between 600 and 1,000 meters above sea level, and planting density ranges from 6,000 to 10,000 vines per hectare. Many of the vines are still on original rootstock, ungrafted, having never been affected by the phylloxera scourge thanks to the unique nature of the volcanic soils.

Alberto has found international acclaim for his wines, which respect local traditions as well as the distinct nature of each Cru and vintage. His works mostly with his favorite red indigenous variety, Nerello Mascalese and Nerello Cappuccio, as well as white grapes Carricante and Catarratto. Intervention of any kind is extremely limited, both in the vineyard and in the cellar. Alberto farms organically, and does not use any type of herbicides in order to preserve the unique balance and vital energy of the soil. Wines are aged in big, upright, wooden casks known as tini and large, well-used wood barrel with the sole objective is to reflect the personalities of the Graci vineyards and the distinct differences between each and every Cru vineyard and harvest.
View all Graci 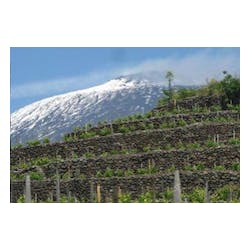