Item Sold Out
Notify me when this item is available
While this item isn't currently available:
"An off-dry style allows this wine to be more versatile and often serves as a compromise wine for those trying to decide between different white styles. This wine remains delicate and fruit forward with lemon zest on the nose and bright tangerine on the tongue, leaving the mouth subtly coated into the finish. Food Pairings: Asian cuisine, poultry, shellfish." ~ Winery notes
Item ID: #1061
Winery: Hermann J. Wiemer Winery
Category: New York White
Size: 750mL (wine)
Closure: Cork
Other vintages
Share this item on FacebookFollow Empire Wine on TwitterFollow Empire Wine on Pinterest

"An off-dry style allows this wine to be more versatile and often serves as a compromise wine for those trying to decide between different white styles. This wine remains delicate and fruit forward with lemon zest on the nose and bright tangerine on the tongue, leaving the mouth subtly coated into the finish. Food Pairings: Asian cuisine, poultry, shellfish." ~ Winery notes 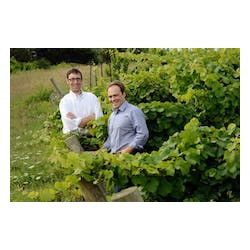