Hosmer Winery is home to Patrician Verona Vineyard established in 1972, comprised of the nearly 70 acres of grapes that provide Hosmer Winery with the fruit to remain a fully functioning estate winery. The vineyard frames our tasting room and production facility creating  ... read more

Hosmer Winery is home to Patrician Verona Vineyard established in 1972, comprised of the nearly 70 acres of grapes that provide Hosmer Winery with the fruit to remain a fully functioning estate winery. The vineyard frames our tasting room and production facility creating a picturesque setting on the western shore of Cayuga Lake in the Finger Lakes region of New York.

With silt loam soils, shale bedrock, and Easterly sloping land that matches near-maximum lake width and depth, Patrician Verona is ideally situated within the Finger Lakes Region to produce premium wine grapes. The grapes include Pinot Noir, Cabernet Franc, Lemberger, Pinot Gris, Chardonnay, Riesling, and Sauvignon Blanc, among several other natives and hybrids. By preserving and building soil the grapes are grown on and exploring new ways to reduce environmental impacts, the vines can inhabit a site less altered by modern agricultural inputs. The wines can portray a truer reflection of the Patrician Verona Vineyard site.
About Hosmer Winery
Robert Collyer Hosmer and grandson Cameron Hosmer look out from the back deck in the summer of 1955 on the property that had been in the family for nearly 30 years. Less than 20 years later, in 1973, Cameron Hosmer and his wife Maren Hosmer planted 5 acres of vines in that exact plot of land. Now Cameron and his son Timothy Hosmer tend to those same vines that rest in the middle of the 70 acres of grapes that now thrive on the Hosmer farm.

Hosmer wines have been recognized consistently over the years at both regional and international competitions, as well as by highly respected publications including the Wine Spectator, Wine Enthusiast, Wine & Spirits, USA Today, The New York Times and the Wall Street Journal.
View all Hosmer Winery 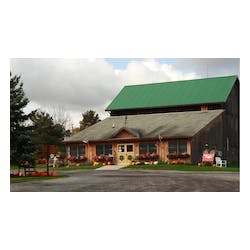