Item Sold Out
While this item isn't currently available:
“Aromatics of tropical fruit including mango and orange dominate, on the palate fruit flavours including peach, nectarine and lemon are balanced by crisp, lively acidity.
Think texture not just sweetness! Perfect on its own; a variety of cheeses (blue veined, aged cheddar, rich cream cheeses with dried fruits); seared scallops; lobster; rich pates; fruit based desserts.”-Winemaker’s Notes

“Austrian-born and monastically educated, Karl J. Kaiser, and native Canadian Donald J.P. Ziraldo, a decendant of a family of winegrowers in Northern Italy, founded Innisklillin Wines on July 31, 1975, obtaining the first winery license granted in the province of Ontario since 1929. Located in Niagara-on-the-Lake at the historic Brae Burn Estate, Inniskillin was founded upon and is dedicated to the principle of producing outstanding wines from vinifera wine grapes grown in the Niagara Peninsula. Karl and Donald tirelessly tested the new ground of Niagara, grafting old-world wisdom in the new-world terroir. Inniskillin rocketed to international notoriety when its pioneering 1989 Vidal Icewine was awarded the Grand Prix d'Honneur at Vinexpo 1991, and drew worldwide attention to Canada's burgeoning wine industry.
What is Icewine?
VQA Icewine is a highly concentrated dessert wine made by harvesting grapes naturally frozen on the vine at -10 C in December-January. Inniskillin VQA Icewine is internationally awarded and recognized and is exported throughout the world.”-Winery Notes 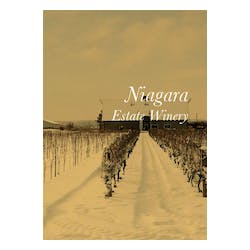 Though Icewine's roots can be traced to centuries old German winemakers, there is nothing more quintessentially Canadian than this luscious luxury borne of patience and sub zero bravura. Grapes are left on the vine well into the winter months to concentrate and intensify the flavours, as water content freezes, thaws and dehydrates in each precious Icewine grape.

Made in the Niagara Peninsula

Ideally suited to the Canadian winter season in both the Niagara Peninsula and the Okanagan Valley, the magical process of crafting Icewine is guided by nature -- triggered by the snap of the wintry elements, the harvest can't begin until temperatures drop below minus eight degrees Celsius for a sustained period of time. Inniskillin produced its first Icewine in 1984 with harvest dates ranging as early as Dec. 2nd and as late as March 5th! There are rigorous specifications regulating the making of Icewine set out by Canada 's quality control and appellation of origin system, the VQA (Vintner's Quality Alliance). Artificial freezing of the grapes is strictly prohibited.

Once the extreme temperatures arrive, which is often in the dead of night, the harvest of the naturally frozen clusters begins. The precious grapes are then pressed in the extreme cold to extract the luscious nectar. In this process, the water content in each grape which is about 80% remains frozen as ice crystals. These crystals will remain inside the grape during pressing puncturing the skin for added flavours. The resulting juice is highly concentrated and rich. Icewine yields are a mere 10-15% of an average table wine harvest. Slowly fermented over the coming months, this delicate nectar will eventually become Icewine.

The finished Icewine is intense and concentrated with the natural sugars balanced with the natural acidities creating a unique sensation on the palate of a surprisingly dry finish. Renowned for its layers of tropical and citrus fruit flavours and aromas ranging from mango to peach to lemon to lychees, Icewine is truly a natural wonder and extreme winemaking at its best. Icewine styles range from non oaked to slightly oaked to Sparkling.

Inniskillin is the World Leader in Icewine

Inniskillin Icewine is well renowned as the world leader in Icewine. It is sold in over 74 countries and is the #1 distributed wine in Global Travel Retail. It can be found around the world on the wine lists of famous restaurants and hotels, in collector's cellars and on many major airlines.