View Cart / Checkout
Loading... Loading cart
Total:
—
0
Cart
Delivery
Search
Menu
Home » Wine » Red Wine » Other Red Wines » J Portugal Ramos Reserva 2019
Sample Image Only
J Portugal Ramos Reserva 2019
$9.95
Ship "12" Free when you mix or match a 12 bottle case! more...
J Portugal Ramos Reserva 2019 ships free when purchased by the 12 bottle case! — Fill a 12 bottle case with this item or any of our other eligible free shipping items, and that case ships for free! Note that there is no limit to the number of cases you can have shipped for free so long as they are filled with eligible "Ship 12 Free" items.
Wine Enthusiast 90
“This rich, wood-aged wine is still young, exhibiting its tannins, black fruits and vibrant acidity. Give it time, though, and this wine will turn into a complex, rich and juicy wine that will exhibit its power and concentration.”

In the decades that Ramos has consulted, he almost single-handedly opened Portuguese winemaking to the benefits of modern technologies with an emphasis on low yields, occasional oak aging, and the preservation of a grape's natural fruit flavors. In 1990, he decided it was time to start creating his own wine and he began planting vineyards in Alentejo around his new winery, Vila Santa.
View all J Portugal Ramos 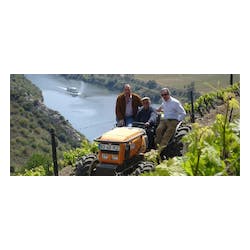