View Cart / Checkout
Loading... Loading cart
Total:
—
View Cart / Checkout
0
Cart
Delivery
Search
Menu
Home » Wine » White Wine » Burgundy White » Jean-Claude Courtault Chablis 2020
Sample Image Only
Jean-Claude Courtault Chablis 2020
Ship "12" Free when you mix or match a 12 bottle case! more...
Jean-Claude Courtault Chablis 2020 ships free when purchased by the 12 bottle case! — Fill a 12 bottle case with this item or any of our other eligible free shipping items, and that case ships for free! Note that there is no limit to the number of cases you can have shipped for free so long as they are filled with eligible "Ship 12 Free" items.
A beautiful golden color, with an aromatic nose of white flowers and stone fruits. Very fruity and complex, with nice volume on the palate. A great minerality, crisp acidity and notes of peach and citrus. Clean, lingering finish. The aromatic profile and structured quality of this wine bring out the very best in grilled fish, salmon or white meats.

Winery Notes:
Grape Harvest generally begins at the end of September and lasts between 12 to 18 days, depending on the year. Our main aim is to harvest the grapes at their optimal ripeness. This allows us to obtain a higher sugar content in the grapes whilst still maintaining pH and acidity at the levels needed to make a well-balanced wine. Grapes are harvested by machine. They are then quickly pressed to reduce the risk of oxidation. Pressing is done using "Buscher" type pneumatic wine presses. Loading is done by conveyor belt in order to limit damage to the grapes.

After one day's cold temperature settling to get rid of impurities, the grape must is fermented in stainless steel vats. Temperatures are regulated during the process of fermentation so as not to exceed 20C. This temperature control is maintained by automatic thermoregulation equipment. Fermentation takes place over a period of 8 to 10 days on average. The next stage is malolactic fermentation, carried out during the two month period after harvesting. This second fermentation, carried out by lactic acid bacteria, reduces the acidity of the wine and helps add extra complexity.

Next, the wine is aged on fine sediment until Spring. Sediment refers to the deposits of yeast and bacteria that have remained in the wine. Ageing wine together with the lees brings added structure and substance; also known as ropy. In some ways, you could say that this is the process of the wine maturing.

Today the two domains work as if there were only one ...
View all Jean-claude Courtault 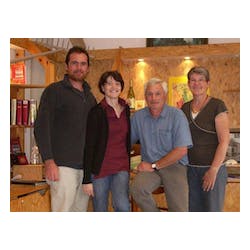