Ship "12" Free when you mix or match a 12 bottle case! more...
Julien Braud Forty Ounce White 2017 1.0L ships free when purchased by the 12 bottle case! — Fill a 12 bottle case with this item or any of our other 400+ eligible free shipping items and that case ships for free! Note that there is no limit to the number of cases you can have shipped for free so long as they are filled with eligible "Ship 12 Free" items.
"This cuve is a blend of 50 Muscadelle, 30 Loin de loeil, and 20 Muscat from Gaillac in Southwest France. The grapes preserve a nice acidity due to the proximity of the Tarn River. Olivier David of Clment Termes is a 7th generation independant grower." ~Winery Notes

"This cuve is a blend of 50 Muscadelle, 30 Loin de loeil, and 20 Muscat from Gaillac in Southwest France. The grapes preserve a nice acidity due to the proximity of the Tarn River. Olivier David of Clment Termes is a 7th generation independant grower." ~Winery Notes

View all from Julien Braud 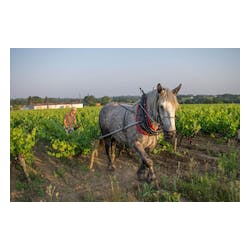 Julien Braud hails from the small village of Monnières in the Sèvre et Maine appellation. Today he owns just over seven hectares, with only around five hectares going into his production. He began his winemaking career at his family's estate, domain Fief aux Dames, where he worked through the 2011 vintage. In 2012, he ventured out on his own when he took over three hectares from his parents. His vision was to work in a way that highlighted the individual terroirs of the region and the heights to which Melon de Bourgogne could be taken. At the young age of 29 years old, Julien is one of only a handful of the next generation of winemakers in the region. He is bucking the trend in the area, which in recent years has seen a decline in producers and Melon de Bourgogne vineyards given the challenges of making a living selling Muscadet. He remains undeterred!

Julien works entirely organically and is recently fully certified. He also incorporates biodynamic approaches. He uses horses in his vineyards to minimize soil compaction, hand harvests, uses only natural yeasts for fermentation after a gentle press, and ages the wines on their lees in glass-lined, underground cement vats. A truly quality-minded approach that has resulted in wines of complexity, texture and balance.