Item Sold Out
Notify me when this item is available
While this item isn't currently available:
Vinous Media 91
“The 2018 Kadette Cape Blend comprises 37% Pinotage, 33% Cabernet Sauvignon, 26% Merlot, 3% Cabernet Franc and 1% Petit Verdot, matured for 12–24 months in French barrels from Nevers. The bouquet offers a mixture of red and black plums, a touch of white pepper and a light Provençal herb note. It opens nicely with aeration. The palate is very well balanced with fine tannins and crisp acidity that lends an appealing edginess. A ... read more

Vinous Media 91
“The 2018 Kadette Cape Blend comprises 37% Pinotage, 33% Cabernet Sauvignon, 26% Merlot, 3% Cabernet Franc and 1% Petit Verdot, matured for 12–24 months in French barrels from Nevers. The bouquet offers a mixture of red and black plums, a touch of white pepper and a light Provençal herb note. It opens nicely with aeration. The palate is very well balanced with fine tannins and crisp acidity that lends an appealing edginess. A little earthy in style, but the fruit comes through toward the finish and leaves residues of black pepper and tangy seaweed on the finish. This is a supremely well made Cape Blend from Kanonkop.”-VM

"The bright ruby color of this wine is complimented on the nose by attractive aromas of red currants, cherries, spice and a touch of mocha. The palate is lively and fresh, with succulent raspberry flavors. The fruit is supported by a firm, yet silky tannin structure. Savory notes persist on the lengthy finish. Chill it down for a refreshing summer drink with seafood, or serve at room temperature when paired with pizza, pasta, stews, roast chicken and barbecued meat. Blend: 37 Pinotage, 33 Cabernet Sauvignon, 26 Merlot, 3 Cabernet Franc, 1 Petit Verdot."-Winemaker Notes

"With a reputation for producing some of the Capes finest red wines, the heralded Kanonkop Estate is often referred to as a South African "First Growth." The fourth generation family farm, presently run by brothers Johann and Paul Krige, has been owned and operated by the Sauer-Krige family since the early 1930s. The name Kanonkop is derived from a "kopje" (small hill) on the property, from which a cannon was fired in the 17th century to announce the arrival of the Dutch East India Companys trading ships at Table Bay.

Kanonkop boasts some of the Capes first commercially planted Pinotage vines, with an average age of over 50 years. Respecting tradition while embracing the future, Kanonkop fuses age-old wine-making techniques with state-of-the art technology. All of the estates grapes are handpicked and sorted. The wines are vinified in open concrete fermenters, using manual punchdowns, and are subsequently aged in French Nevers oak barrels.

Kanonkop continues its long history of excellence under Abrie Beeslaar, winemaker at the estate since 2002. In addition to garnering regular 90+ ratings for his bottlings in such publications as Wine Spectator and Wine Enthusiast, Beeslaar was crowned the 2008 International Winemaker of the Year at the International Wine and Spirits Competition in London, where Kanonkop also received the Chateau Pichon Longueville Comtesse de Lalande trophy for the best blended red wine with its Paul Sauer 2003 and the Dave Hughes Trophy for Best South African Producer. In addition, Kanonkop was named "Winery of the Year" and its Cabernet Sauvignon 2004 earned "Wine of the Year" in the 2009 edition of John Platters South African Wine Guide widely recognized as the most authoritative and comprehensive guide on the world of South African wine. Kanonkop Wine Estate was also named the "Most Admired Wine Brand in South Africa" and listed at #32 on the Most Admired Wine Brands in the World" by #DrinksInternational in 2020."-Winery Notes 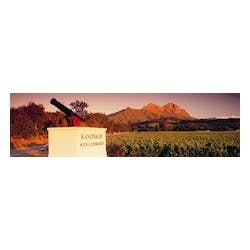