Pinot Noir is considered by many the finest red wine grape in the world. Pinot Noir is the grape for France’s famous Burgundies; Pinot has the ability to allow the “terroir” (the unique, site-specific combination of soil, climate and other factors) to show in the wines, and that is the mist important goal in Burgundy. Pinot Noir is also important in the USA, and it’s planted widely in California and Oregon. Pinots can be made into wines of delicacy, with expressive aromatics or full-bodied, richly-fruited examples. Though sometimes difficult to grow, Pinot Noir is truly a winemaker’s grape.

Located in rural Carlton, Oregon, Ken Wright Cellars is devoted to showcasing the inherent quality of selected vineyard sites. With a clarity and breadth that is unequaled by other varieties, the people at Ken Wright cellars believe Pinot noir best expresses the character of these sites. Rather than stamping wine with a varietal trademark, they see Pinot noir as a vehicle for conveying the aroma, flavor and texture of the location in which it is grown.
View all Ken Wright 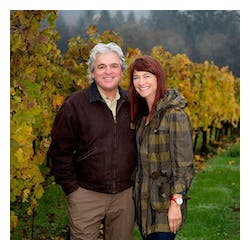