Item Sold Out
Notify me when this item is available
100% Mourvedre from decomposed granite soils.

Foot crushed, whole cluster fermented in open top tanks, and aged in a combination of tanks and barrel. Bottled unfiltered with just 15ppm of added sulfites. Only 138 cases made.

"The Cedarville is always light in color. A sort of garnet, plummy red. It shows lots of citrus in the nose, along with plum and granite soil. The earth here speaks. Initially, a medium-light body which gains volume on the palate. ... read more
Item ID: #28553
Winery: La Clarine Farm
Category: Other Red Wines
Size: 750mL (wine)
Closure: Cork
Other vintages
Share this item on FacebookFollow Empire Wine on TwitterFollow Empire Wine on Pinterest

Foot crushed, whole cluster fermented in open top tanks, and aged in a combination of tanks and barrel. Bottled unfiltered with just 15ppm of added sulfites. Only 138 cases made.

"The Cedarville is always light in color. A sort of garnet, plummy red. It shows lots of citrus in the nose, along with plum and granite soil. The earth here speaks. Initially, a medium-light body which gains volume on the palate. Finishes with more citrus and peppery notes. Very long with very fine tannins." ~ Hank Beckmeyer, winemaker

View all from La Clarine Farm 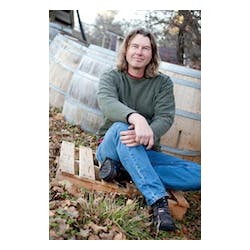 "La Clarine Farm makes wines that are alive in the glass... I love their minimalist approach in the vineyard and the cellar, and I've loved all their wines, whether mourvèdre, rosé or the 2011 Piedi Grandi, a blend of nebbiolo, mourvèdre and syrah that is precise, savory, juicy and just plain delicious." -Eric Asimov, NY Times, June 2013

"...the wines are defiant and different, and are helping to rewrite the story of the Sierras" – Jon Bonné, The New California Wine

"Is someone else doing anything as insanely stupid as we are?" – Hank Beckmeyer, La Clarine Farm

Hank Beckmeyer and his wife, Caroline, met while he was on tour in Europe with his band Half Japanese. He left the band and the tour to remain with her in Europe. Over the next few years they became immersed in the great wines of Europe and started to wonder whether this was something they could do themselves. They settled on the Sierra Foothills and in 2001 they purchased the property that is La Clarine (Cowbell) Farm.

2600 feet up in the foothills they planted 2 acres of vines, mostly Tempranillo but also including Syrah, Tannat, Grenache, Negroamaro, Cabernet Sauvignon, and some unknown vines that emerged from seeds in the compost heap. The vineyard is farmed following the farmer-philosopher Masanobu Fukuoka's 'do nothing' methods. As the name implies, the vineyard is allowed to grow wild, with weeds, insects, birds, and all sorts of life teeming among the vines. From this vineyard he produces a single wine in extremely low quantities.

For the rest of his wines he purchases fruit from like-minded farmers in the area. He makes a variety of bottlings but handles all of his wines using some essential methods: Native yeasts, neutral or no oak, and minimal sulfur. The goal here is to keep his wines fresh and pure expressions of their individual terroirs.

Hank's wines are made without thought given to critics, scores, popular styles, or anything else. They are simply the wines that he wants to make and the results speak for themselves. Each bottle is distinctive and alive, a testament to the surprises you can find in a bottle simply marked 'domestic'.