Chianti Classico Riservashow the mid weight, understated personality of the year in a delicate, ethereal expression of plums, black cherries, licorice and tobacco.

View all from La Maialina 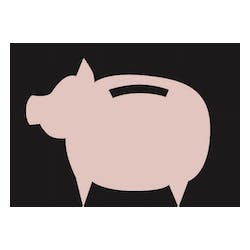 La Maialina Chianti, Chianti Classico, and Chianti Classico Riserva are crafted to express the essence of the territory and tradition of quality of this historic region. La Maialina celebrates the history, culture, and cuisine of Chianti, famed for its beautiful landscape marked with green, gentle hill covered vineyards, olive groves and cypress trees. Rolling hillsides lend themselves to the optimal cultivation of the Sangiovese grape, ripening to perfection during the dry, warm summers.

Settled first by Etruscan then the Romans, the territory has been prized since antiquity for its rich soil and favorable climate for the cultivation of grapes and olives. The earliest documentation of a "Chianti wine" dates back to the 13th century when viticulture was known to flourish in the "Chianti Mountains" around Florence. The name 'La Maialina' (little pig) references the Cinta Senese heirloom breed that originated in the Siena area during the 1300's and is the only Tuscan native pig to survive extinction.