Item Sold Out
While this item isn't currently available:
James Suckling 96
"Very fresh and vivid 2009 with berries, dark spice and hints of walnuts. Full-bodied, reserved and so held back and muscular, but you don’t feel the tannins and the strength. A great wine. Give it two or three years. Try in 2020.
Publish Date: Thursday, August 2, 2018

Wine Advocate 93+
"The current vintage of one of the flagship wines from La Rioja Alta is the 2009 Viña Ardanza Reserva, the second year it has contained ... read more

James Suckling 96
"Very fresh and vivid 2009 with berries, dark spice and hints of walnuts. Full-bodied, reserved and so held back and muscular, but you don’t feel the tannins and the strength. A great wine. Give it two or three years. Try in 2020.
Publish Date: Thursday, August 2, 2018

Wine Advocate 93+
"The current vintage of one of the flagship wines from La Rioja Alta is the 2009 Viña Ardanza Reserva, the second year it has contained 20% Garnacha grapes from their estate vineyards in La Pedriza in the village of Tudelilla in Rioja Baja. The Tempranillo comes from vineyards averaging 30 years of age in Fuenmayor and Cenicero. The hand-harvested bunches were sorted and put in boxes, transferred to the winery at 14 degrees Celsius to be destemmed and crushed, then the grapes fermented in stainless steel, including malolactic. The two varieties were aged separately, 36 months in used American oak barrels for Tempranillo and 30 months for Garnacha, and racked every six months. It was initially closed, shy and serious, riper and a little darker than the 2008 but still very balanced, serious and harmonious. The palate combines power with elegance, with some tannins, focused flavors, some chalky texture and a rustic touch that gives it character. 600,000 bottles produced. It was bottled in May 2014."

Selective harvest in crates and refrigerated transport. The Tempranillo wine spent 36 months in American oak barrels with an average age of 4 years, and the Garnacha wine was aged for only 30 months in 2 to 3 years old American oak barrels so the freshness and authenticity of this grape variety could be maintained. The wines were manually racked six times and bottled in December 2009.

VINTAGE
The long growing season allowed for balanced canopy development and the grapes enjoyed good sun exposure. With moderate yields, grape ripening was slow and leisurely, favouring the perfect development of very loose clusters. After a staggered and very selective harvest, the grapes arrived at the crush pad at their optimum ripeness, in excellent health and with a great balance of alcohol content, polyphenols and acidity. The grapes met all the requirements to make great wines, particularly suitable for barrel ageing and laying down for a long time. This harvest was officially rated Very Good.

VINEYARDS
After a year without getting Garnacha grapes of sufficient quality to make the Viña Ardanza, in 2008 we found that both this grape variety and the Tempranillo were optimal. The Tempranillo grapes (80%) come from our 30-year-old La Cuesta and Montecillo vineyards, located in Fuenmayor y Cenicero. The Garnacha grapes (20%) come from old, goblet-trained vines planted at an altitude of 600 m in Tudelilla (Rioja Baja), in plots adjacent to our Finca La Pedriza vineyard.

WINEMAKING AND AGING
The grapes were harvested manually and taken to the winery, where they were refrigerated in order to preserve their quality. Alcoholic fermentation took place in tanks at controlled temperatures. After malolactic fermentation, the selected wines started their barrel ageing in March 2009. The Tempranillo spent 36 months in American oak barrels with an average age of 4 years and the Garnacha stayed for 30 months in 2- and 3-year old American oak barrels. The wines were racked manually on six occasions. The wine was bottled in November 2012.

PAIRING
The ideal partner for roasted and grilled meats, barbecues, poultry and game, Iberian ham and sausages, as well as semi-cured cheeses. 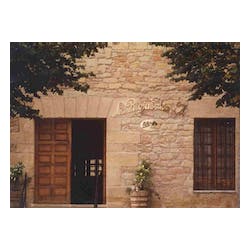