Ship "12" Free when you mix or match a 12 bottle case! more...
Le Cinciole Chianti Classico 2012 ships free when purchased by the 12 bottle case! — Fill a 12 bottle case with this item or any of our other 400+ eligible free shipping items and that case ships for free! Note that there is no limit to the number of cases you can have shipped for free so long as they are filled with eligible "Ship 12 Free" items.
Vinous Media 91
"Le Cinciole's 2012 Chianti Classico is gorgeous. Gracious and lifted in the glass, the 2012 is not a huge wine, but rather a Chianti Classico built on finesse. Freshly cut flowers, sweet red berries, cinnamon and mint add nuance on the lifted, aromatic finish. The 2012 is pure class. -- Antonio Galloni"

Vinous Media 91
"Le Cinciole's 2012 Chianti Classico is gorgeous. Gracious and lifted in the glass, the 2012 is not a huge wine, but rather a Chianti Classico built on finesse. Freshly cut flowers, sweet red berries, cinnamon and mint add nuance on the lifted, aromatic finish. The 2012 is pure class. -- Antonio Galloni"

Vinification and aging process: the grapes are harvested by hand and carefully selected. After destemming they are delicately crushed and collected in cement vats for 10-15 days. During the natural alcoholic fermentation the must is controlled continously so that the temperature does not exceed 30° Celsius. After the alcoholic fermentation the wine is racked into other vats for the malo-lactic fermentation that generally is concluded by the end of December. The wine is racked again into medium capacity barrels (20 hectoliters) where it is refined for 12 months. Bottling usually takes place in March.
Average production/year: 2000 cases

View all from Le Cinciole 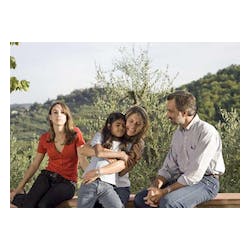 "This little-known Chianti producer makes wines that are lip-smackingly good, refreshing and absolutely true to Sangiovese aromas and flavors. It is not by accident that some of the most respected names in Chianti, such as Ama's Marco Pallanti, will whisper that this estate is one of the very best at making authentic Chianti." – International Wine Cellar

"Le Cinciole is one of my favorite Chianti Classico estates, and its wines epitomize fragrant, elegant high-altitude Sangiovese...for finesse, focus, and personality these wines are hard to beat in their zone." –Wine Advocate

In 1991, Milan residents Luca and Valeria Orsini took a radical leap; tired of the fast-paced city life, they seized the opportunity to buy the Le Cinciole estate in the storied Chianti village of Panzano. They relocated to Tuscany and left their former careers as math professor and architect to become grape growers and winemakers. Their first vintage was not the most encouraging: 1992 was a horrendous vintage in Tuscany! Nevertheless, the Orsinis kept on in their pursuit of great Chianti Classico and now, almost twenty years later, they have succeeded masterfully!

Named after the property's historical place name, which was a twist on the ancient Etruscan-Roman name designating the immediate area as "the lands of Quintius," the estate, now recognized throughout Italy for its quality, extends across northern Chianti Classico district Greve's famed "Conca d'Oro", or "golden vale". Though most vineyards in Greve are at approximately 200-350 meters, Le Cinciole's Panzano slopes rise to a cool 400-450 meters and host Chianti's famous galestro soil mixed with sand and chalk. With a total of 13 hectares planted to vines, 11 are currently in production, whereas 5 additional hectares are planted to olive groves. The Petresco vineyard, which is the source for the grapes for the Riserva, is limestone-based. Only a few wines are produced at Le Cinciole in order to focus on quality.

Vineyard Practices: This winery is certified Organic by ICEA, The Italian Institute for Ethical and Environmental Certification.