View Cart / Checkout
Loading... Loading cart
Total:
—
0
Cart
Delivery
Search
Menu
Home » Wine » Red Wine » Italian Red » Le Potazzine Brunello di Montalcino 2017
33%
OFF Sample Image Only
Le Potazzine Brunello di Montalcino 2017
$126.00 $84.95
Ship "12" Free when you mix or match a 12 bottle case! more...
Le Potazzine Brunello di Montalcino 2017 ships free when purchased by the 12 bottle case! — Fill a 12 bottle case with this item or any of our other eligible free shipping items, and that case ships for free! Note that there is no limit to the number of cases you can have shipped for free so long as they are filled with eligible "Ship 12 Free" items.
Wine Enthusiast 97
"Aromas of crushed mint, pressed rose and perfumed berry mingle with warm spice in this dazzling red. Thanks to some of the highest vineyard altitudes in the denomination, it boasts vibrancy and finesse in its flavors of ripe black cherry, juicy blood orange, licorice and crushed mint. Taut, elegant tannins and fresh acidity keep it balanced and focused. Drink 20252032." 04/22"

Wine Advocate 95
"The ladies of Le Potazzine make a terrific bottle of Brunello, and their high-elevation vineyards are especially important in maintaining freshness in a scorching-hot vintage such as this. The 2017 Brunello di Montalcino offers a pretty succession of wild berry, cherry and plum aromas, along with light spice, crushed flowers and perfumed potting soil. This wine is also distinguished by a touch of bay leaf and maybe a warmer note of cured tobacco as well. This is an impressive effort (with 16,000 bottles released)."

Vinous Media 94
"An exotic mix of sweet smoke and cloves gives way to dusty black cherries and a twang of sour citrus as the 2017 Brunello di Montalcino unfolds in the glass. Further time reveals hints of animal musk and flowery undergrowth. This enters the palate with pure elegance, delicate and silky in feel, yet also delivering a core of salty minerals that adds unexpected depths to the vivid display of tart wild berries and inner spice. The 2017 finishes with incredible persistence but also poise, structured yet primary, exactly as it should be at this young stage. Keep your hands off for at least a few years, because the best is yet to come. The higher elevations and no-nonsense winemaking at Le Potazzine really aided in creating one of the most balanced and, frankly, interesting wines of the vintage. - By Eric Guido on October 2021"

Decanter 94
"Le Potazzine is run by Gigliola Giannetti and her daughters Viola and Sofia. Viola started taking over winemaking responsibilities in 2017 at the age of 24. She continues with the estates long-established approach of spontaneous fermentations in open top vats, lengthy macerations, no filtering and low SO2. I always find the wines a bit wild at first before an intense purity comes through. The 2017 reveals balsamic notes of sun-dried thyme and herb flowers before floral accents take over. It's a relatively powerful expression for Le Potazzine but ultimately expresses the propertys signature elegance. Grainy, sandy tannins wrap around ripe strawberry fruit, leading to a lingering finish of potpourri and orange." 11/21

The Wine
100% Sangiovese from two vineyards in Montalcino: Le Prata close to Montalcino with SE exposure at 500m above sea level; and La Torre in SantAngelo in Colle with SW exposure at 420m above sea level
Fermentation and maceration lasts 30 days
Matures for 40 months in large oak cask before finishing in the bottle for 12 months before release
1500 cases produced annually

The Estate
There is no person more Montalcino than Gigliola Giannetti. Born and raised in Montalcino, her first full time job was working for Franco Biondi Santi, owner of one of the towns most famous estates in 1985. But she wasnt content to stay very longin 1987 Gigliolas entrepreneurial spirit brought her to open her own wine shop on the main drag of Montalcino. In her work for the Consorzio di Vino Brunello di Montalcino, she had befriended the legendary consultant Giulio Gambelli, who later stewarded the founding of her own estate when she bought her first parcel of land in 1993, coinciding with her daughter Violas birth. In 1996, she purchased another parcel of land in SantAngelo in Colle, La Torre, coinciding with her second daughter Sofias birth. 1997 was the first vintage of Brunello Le PotazzineLe Potazzine was the nickname Gigliolas mother had given her two delightful granddaughters, local dialect for a songbird noted for its beauty and happiness. The wines immediately thrilled clients and critics alike, and even though it was the moment of the barrique, Gigliola was never tempted to change her aging regime from large Slavonian cask. The wines were always laser pure expressions of Montalcino terroir with an appealing elegance, and they remain so today. Both Potazzine now work with their mother at the estate, guaranteeing the continuity of a future generation.

Fermentations at the cantina are traditional: done with native yeasts at ambient temperature and long up to 30 days for both Brunello and Rosso. Both wines age in Slavonian oak casks of 30-50 hectoliters; Brunello for 42 months, and Rosso up to 12 months, and the rarest of all Riserva up to 60 months. It should be noted, however, that Le Potazzine has only made a Riserva four times in 25 years of production: 2004, 2006, 2011 and 2015. All 5 hectares of Le Potazzines vineyards are classified for the production of Brunello, so their Rosso is of course declassified Brunello. The family has always worked organically, but from 2019 all wines will be certified organic (even if not stated on the label).
About Le Potazzine
Few estates in Montalcino can count an in-house enologist as an owner, but Giuseppe Gorelli of Le Potazzine is just that. Before founding his own estate, he worked as an enologist at the Consorzio del Brunello for 15 years with the great Giulio Gambelli, the man behind Pergole Torte and the 100% Sangiovese movement in Tuscany. In the late 1980s, Giuseppe came home to roost at his father's tiny estate near Castiglione del Bosco, known as Due Portine, and started making traditionally-crafted, artisan Brunello, which he produced from vintages 1987 to 1998.

In 1993, while running Due Portine, Giuseppe and his wife Gigliola purchased a 3.5 hectare farm at 500 meters above sea level right next door. They named it 'Le Potazzine,' which in the dialect of Montalcino it describes a highly-colored bird noted for its loveliness and happiness, after the nickname Gigliola's mother had given her two young daughters. In 1998, Giuseppe's father sold Due Portine, and the couple concentrated their efforts at Le Potazzine. The results thrilled clients and critics alike, and though it was the "moment of the barrique," Giuseppe and Gigliola never felt the need to experiment or change. The wines were always laser pure expressions of Montalcino terroir with an appealing elegance, and they remain so today.

Fermentations at the cantina are traditional: done at ambient temperature and long – up to 30 days for both Brunello and Rosso. Both wines age in Slavonian oak casks of 30-50 hectoliters; Brunello for 42 months, and Rosso up to 12 months. All of Le Potazzine's vineyards (now measuring 5ha with an extra 1.5 ha purchased in Sant'Angelo in Colle) are classified for the production of Brunello, so the Rosso is of course declassified Brunello. Giuseppe has always worked organically, but from 2019 all wines will be certified organic (even if not stated on the label).
View all Le Potazzine 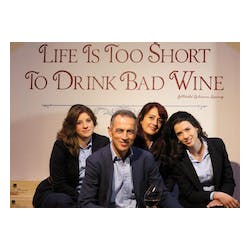