" Cabernet Sauvignon grows almost everywhere. In warmer regions like Australia, you'll frequently get more ripe fruit flavors upfront. Grapes are picked when higher in fruit and lower in acid, often giving a more approachable wine.
Pairs Well With: Beef, lamb, and goose. It also is a great match for brie, cheddar cheese, and dark chocolate. (Ooops, we had it with pizza!)" ~ Winery notes

View all from Lindemans 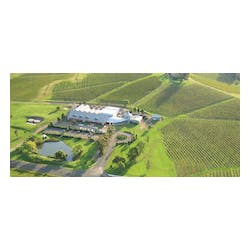 Lindeman's is enjoyed 80 million times a year in over 100 countries around the world – allowing family and friends to reconnect and enjoy time together. Lindeman's global popularity has been driven by the positive philosophy of Dr Henry Lindeman, who established Lindeman's in the Hunter Valley in 1843. Perfect for everyday moments, yet equally worthy of an occasion, Lindeman's immensely popular wines are approachable and accessible, with an unfailing record of consistent quality and timeless appeal. What makes us smile? Friends and family around the table, sharing stories over a bottle of wine, hearty conversation and great food, any day of the week and any time of year. The World Smiles with Lindeman's. In every bottle of Lindeman's wine you will find the spirit of our founder, Dr Henry Lindeman. From humble beginnings in the Hunter Valley in 1843, Dr Lindeman laid a strong foundation for what has become one of the world's most popular wines. The first Lindeman's wine to venture overseas was in 1858, when Lindeman's Cawarra Claret was exported to the United Kingdom. By 1862, Lindeman's wines were being exhibited widely around the world and Lindeman's Cawarra gained international recognition at the International Exhibition, London. The accolades and awards continued to follow and over the next 100 years, Lindeman's global footprint grew significantly. It was in the 1980s that Lindeman's most well-known wine was created. Lindeman's iconic Bin 65 Chardonnay was launched in Canada in 1985 in response to the popularity of Lindeman's approachable and fruit-driven style of wines in the northern hemisphere. Following its success in Canada and the United States, Lindeman's Bin 65 was then 'brought home' to Australia in 1991. Bin 65 Chardonnay captured the world's adoration of Australian wine and propelled the popularity of Lindeman's on an international scale. The Bin Series has since grown to incorporate 18 popular varieties. Today, Lindeman's is enjoyed in over 100 countries around the world. We are proud to draw on 170+ years of continued winemaking and entrepreneurship to craft popular wine styles that people simply love to drink.