View Cart / Checkout
Loading... Loading cart
Total:
—
0
Cart
Delivery
Search
Menu
Home » Wine » White Wine » New York White » Lucas Vineyards Blues White
Sample Image Only
Lucas Vineyards Blues White
Winery Notes
This package is sure to rock your boat! Fresh lighthouse design and a screw cap releasing the light, citrusy white wine everyone loves. Bright, crisp and smooth with tangy citrus fruit flavors. This refreshing blend of Seyval and Cayuga grapes is a great versatile white wine. Served with food or by itself, it is a true delight! Let Lucas Blues take you to your happy place. Whether it’s by the water, in your back  ... read more

Blues (RS 1.80%)
About Lucas Vineyards
The Story Begins
With A Family's Dream & Ambitions

The Lucas Vineyards story begins in 1974 when Ruth Lucas and her family moved from the Long Island to a 68 acre farm in Interlaken, New York. Rooted in the family was a common dream of creating a successful family business through grape growing in the Finger Lakes region which was just starting to thrive.
The First Harvest
The young family all chipped in and tended to the farm; pounding posts, tilling soil, trimming vines, and finally harvesting their first crop of grapes in 1978. When a feeling of loss set in after selling their carefully tended grapes to a winery that combined theirs with tons of others, the Lucas family made a brave decision to start making their own wine under the Lucas Family Vineyards label.
The first 1980 vintage, consisting of less than 500 cases of Cayuga White and Estate Red, took home gold and silver medals, and the Lucas family knew they made the right choice. The founders of the winery were Bill, a tug boat captain from the New York harbor; Ruthie, the oldest daughter with a creative and adventurous spirit; Billy, the hard working and able bodied son; Stephanie, the youngest daughter with natural hospitality and customer service skills and Ruth, the matriarch and pioneer of the first winery on Cayuga Lake.
View all Lucas Vineyards 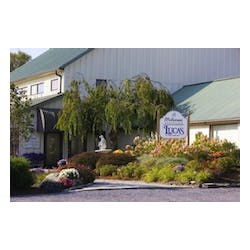