Lustau made its reputation in the foreign markets with its extraordinary single cask Almacenistas which had been accumulated by the family  ... read more

Lustau made its reputation in the foreign markets with its extraordinary single cask Almacenistas which had been accumulated by the family over many years as their soleras are among the oldest in Sherry. The family also owns over 500 acres of vineyards. These are all remarkable efforts for their stunning value. While they are still under-the-radar for most American wine lovers, I encourage readers to give them a try as they are great introductory reference points for how profound sherry can be. I first wrote about the extraordinary sherries of Emilio Lustau many years ago, in the early days of The Wine Advocate. The portfolio of under 25 a bottle selections represents remarkable value for their complex, well-made personalities. Lustau includes a bottling date code as purchasers would want to buy Finos and Manzanillas as young as possible. It is difficult to describe the glories of sherry, but Ill try. These Solera Reservas are all great reference points at a low price point from Lustau. None of the Almacenista soleras, which are single cask and very limited bottlings, are reviewed since they are priced over 25 a bottle, but they can be as profound as any alcoholic beverage in the world." ~ RP

" Although this is very rich, it is by no means sweet. Its gold color and flavor of rich, bitter chocolate, and of baked chestnuts leaves an intense and concentrated aftertaste, lightened by a tangy acidity.

The "Don Nuno" Oloroso is best served as an aperitif with blue or strong-flavored cheeses, or as a digestif with nuts after a meal. It should be served at cool room temperature. " ~ Winery notes
About Lustau
"Simply staggering in quality... Sherries such as these remain among the last great unknown wine bargains of the world. They must be tasted to be believed!"
-Robert Parker

Lustau offers a wide array of Sherries; bone-dry Finos are wonderful matches with garlic-y shrimp and langostinos. Racy Amontillados balance power with finesse and are wonderful with nuts, olives, cheeses, and jamon Serrano. Powerful Olorosos can be served during a meal and match well with traditional soups and stews. Of course, the wide range of dessert wines from Lustau are unparalleled; the elegant East India Cream Sherry is as soft as silk, the Moscatels offers a delightful citrus edge that keeps the wines lively on the palate while the dark Pedro Ximenez is best served as a "syrup" over vanilla ice cream, pancakes or waffles.
View all Lustau 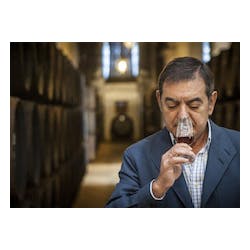 No questions posted yet about this item.
Lustau Oloroso Sherry
"We recently had the privilege of visiting Bodegas Lustau and found this sherry one of our favorites, so full of flavor. We were surprised and delighted to find it carried by Empire."
Posted byDavidbell on Apr 27, 2022Verified Purchase
private review
Posted bycustomer on Feb 3, 2016Verified Purchase
Posted byRobin on Feb 24, 2021Verified Purchase
Subscribe to our newsletter!