Pretty high elevation (1400-1450 ft) from their vineyards, young vines, between 11-13 years old. Because of the wildfires in 2017 Ross and Bee gave the fruit a short and gentle 9 day maceration. Fruit was co-fermented in tank, then aged 9 months in neutral oak barrels.
About Maloof Oakridge Vineyard
Ross Maloof got his start in winemaking through the Philadelphia restaurant scene, while he was working at such wine destinations as Vedge and A. Kitchen. In the midst of managing a booming, natural-focused wine program he connected with Brianne Day and soon found himself working harvest at Day Camp (A co-op started by Brianne). He returned the following year with his fiancée, Brittany Selman, and stayed even longer this time. They came back to Philly, but Oregon had left its mark on them, and they wouldn't be staying away long. In 2017 they will be relocating to Oregon permanently.

During these two harvests, Ross was able to make a little wine of his own, and such is the start of R. Maloof wines. The first release is a Syrah & Viognier blend reminiscent of Day's Hock & Deuce, yet is a distinctive expression all its own. It was made under Brianne's careful guidance and, in fact, is emblazoned with her likeness, but shows an exciting glimpse of Maloof's abilities and vision.
View all Maloof Oakridge Vineyard 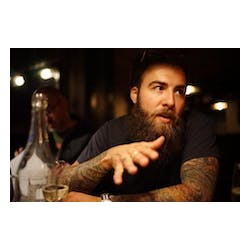 No questions posted yet about this item.
fantastic!
"bright and fun"
Posted byAlexandra on Dec 7, 2018Verified Purchase
Subscribe to our newsletter!