Item Sold Out
While this item isn't currently available:
This cuvee takes the Vin de France appellation, because the Beaujolais’ governing body decided to do away with the Vin de Pays designation in Beaujolais, leaving only the appellations and Vin de France. The wine is still almost all from the cru of Morgon, with a little bit of A.O.C. Beaujolais as well.

Bottled just after a winter settling (in screwcap, no less!), this wine is pure, unadulterated pleasure. If you've got a crowd (and two is a crown in this case), one bottle won't be enough.

View all from Marcel LaPierre 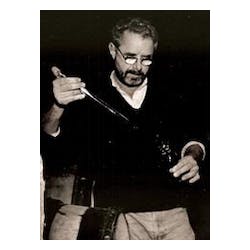 Little would we know that when Marcel Lapierre took over the family domaine from his father in 1973, he was on the road to becoming a legend. In 1981, his path would be forever changed by Jules Chauvet, a man whom many now call his spiritual godfather. Chauvet was a winemaker, a researcher, a chemist, and a viticultural prophet. It was he who, upon the advent of chemical fertilizers and pesticides in the 1950s, first spoke out for "natural wine," harkening back to the traditional methods of the Beaujolais. Joined by local vignerons Guy Breton, Jean-Paul Thévenet, and Jean Foillard, Marcel spearheaded a group that soon took up the torch of this movement. Kermit dubbed this clan the Gang of Four, and the name has stuck ever since. These rebels called for a return to the old practices of viticulture and vinification: starting with old vines, never using synthetic herbicides or pesticides, harvesting late, rigorously sorting to remove all but the healthiest grapes, adding minimal doses of sulfur dioxide or none at all, and disdaining chaptalization. Sadly, the end of the 2010 vintage was Marcel's last. He passed away at the end of the harvest--a poetic farewell for a man that forever changed our perception of Beaujolais. His son Mathieu and daughter Camille confidently continue the great work that their father pioneered, now introducing biodynamic vineyard practices and ensuring that Marcel's legacy lives on.