Fact 2: Marcelo was the first Latin American winemaker to earn 100 points from influential wine critic Robert Parker with a French wine (Château La Violette 2010). His Argentine wines are also consistently recognized with impressively high scores and accolades. Marcelo's mentor, the legendary oenologist and wine consultant Michel Rolland, must be very proud of all that Marcelo has achieved. Thanks to Black Dress Traveler for contribution.
View all Marcelo Pelleriti 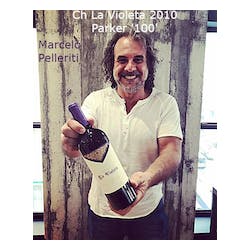