Crafted predominantly with estate-grown fruit, this “right bank” Bordeaux-style red blend allows the velvety Merlot flavors to shine. With 15 months of French & American oak aging, the opulent notes of cherry and plum jam are layered with aromas of cola, vanilla and toast.

View all from Markham Vineyards 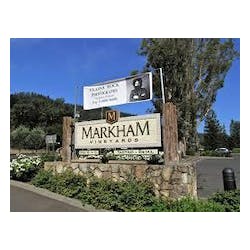 Bordeaux immigrant Jean Laurent came to California in 1852 to seek gold but instead founded one of the first wineries in Napa Valley. Laurent built his first winery in 1874, which was a modest wooden structure. Business was good and in 1879 he built the stone cellar that is the heart of the present-day winery. Laurent was one of the largest producers in the California wine boom of the 1880s. In those days, wines were sold in bulk and shipped by train to the east coast. After Laurent's death in 1890, the winery continued operating under a succession of owners.

He purchased vineyards in Yountville, Oak Knoll and Calistoga and the old Laurent winery, which was operating as a cooperative at the time. In 1978, he founded Markham Vineyards and the old Laurent winery was reborn. Markham focused on Cabernet Sauvignon in its early days and introduced the Markham Merlot with the 1980 vintage. From 1978 to 1988 the winery's production increased from 3,500 cases to 20,000 cases. The wine quality and praise from wine critics and consumers increased as well.

In 1988, the old Laurent Winery once again rose like a phoenix to take on another new life. The winery was sold to Mercian Corporation and began an ambitious four-year, multi-million dollar renovation, expansion and vineyard-replanting program. These efforts would more than double the capacity and make Markham one of the most advanced, stunning winemaking facilities in the country. Even through the dust of the renovation, Markham was able to produce three of the number-one rated wines from California, as judged by Wine Spectator magazine.