3.7 of 5 (3 reviews)
Item Sold Out
Notify me when this item is available
While this item isn't currently available:
Tim Atkin 93
Mixing fruit from the various villages in the Rioja Alta with 15 fruit from Laguardia and Lanciego, this stylish, Tempranillo-dominated Reserva is made to a commendably consistent quality. Aged in French oak, it's dense, concentrated yet refreshing with bramble, black cherry and nutmeg flavors and fresh acidity.-TA

Tim Atkin 93
Mixing fruit from the various villages in the Rioja Alta with 15 fruit from Laguardia and Lanciego, this stylish, Tempranillo-dominated Reserva is made to a commendably consistent quality. Aged in French oak, it's dense, concentrated yet refreshing with bramble, black cherry and nutmeg flavors and fresh acidity.-TA

Tasting Panel 93
Dark garnet color and a nose of cherry and earth; smooth, bright, and juicy with mature notes of plum and spice. Balanced and complex, long and complete.-TP

Founded in 1970, with its first release in 1975, Marqus de Cceres the Rioja bodega was established by Henri Forner, whose family has been active in the wine business for generations. The winery is named for a Spanish peer who was also an investor in the winery and a friend of Henri Forner.
The Forner family fled Spain during the Spanish Civil War and settled in France. In the early 1960s, Henri Forner and his brother Elyse bought and restored two abandoned chateaux, Chateau Camensac and Chateau Larose-Trintaudon. These chateaux are now recognized as two of the finest properties in Bordeaux. When Henri decided to establish a bodega in his homeland, he selected what he considered the finest viticultural area in Spain: Cenicero in Rioja Alta.
Emile Peynaud, former professor and chief wine researcher at the University of Bordeaux, was initial consultant to the winery. Today, Michel Rolland is wine consultant at Marqus de Cceres and Henri and his daughter, Christine, are at the helm. The vinification methods at Bodegas Marqus de Cceres are similar to those used in Bordeaux. Thus, French winemaking techniques and expertise have been applied to native Spanish grapes to produce one of the finest modern Riojas.-Winery Notes 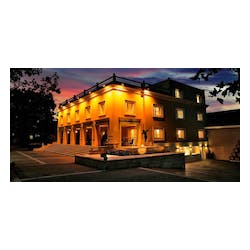 "Tart cherry and blackberry. Nice long finish. Pretty hard to beat at this price. These guys are very consistent year after year. Equally good for quaffing and pairing with beef."

"If you do not like structural acidity in your wine, this could be a homerun for you. It is extremely soft, mouth filling, round, and full of fruit. It lacks brightness and structure. There are many real high reserve as of this vintage from other makers I would much prefer to drink. Vina Alberdi Is way more food friendly, for example, and available for a very aggressive price from Empire. For a slam dunk Crianza I would try El Cotofor around nine bucks."