Vinous Media 92
"Puente Alto and Pirque come together in this textbook Maipo Cabernet Sauvignon with a twist: it was aged in casks to add elegance to the regions familiar complexity. Licorice, cassis, blackberry and thyme flavors appear at  ... read more

Vinous Media 92
"Puente Alto and Pirque come together in this textbook Maipo Cabernet Sauvignon with a twist: it was aged in casks to add elegance to the regions familiar complexity. Licorice, cassis, blackberry and thyme flavors appear at first followed by caramel. Very precisely calibrated, the firm tannins and expressive flavor underline the accomplished nature of the wine and lengthy, juicy finish."

Wine Spectator 91
"There's minerally richness to the lithe mix of dark fruit and spice flavors in this red. Dark chocolate and mocha fill the plush finish, with hints of dried herbs. Drink now through 2024. 75,000 cases made, 12,000 cases imported."

Wine Advocate 90
"The 2018 Marques de Casa Concha Cabernet Sauvignon is a blend of grapes from Puente Alto and Pirque. It has some balsamic aromas and clean cassis aromas, with good freshness combined with good volume. It has good varietal typicity, very integrated oak (matured in barrique and oak foudres) and just a touch of cedar wood and is juicy and vibrant. This is really very good in a fresh vintage like 2018. 900,000 bottles produced. It was bottled in January 2020."

"Fiery, ruby red. Black currants, red cherries with touches of toasted French oak. On the palate, it is smooth, round and potent. Fine and well balanced, the Marques has a long finish."
About Concha y Toro
The Concha y Toro Vineyard was founded by Don Melchor de Santiago Concha y Toro and his wife, Emiliana Subercaseaux, in 1883.[2] To start the winery, he brought grape varieties from the Bordeaux region in France.[2] The grapes that he brought were: Cabernet Sauvignon, Sauvignon blanc, Semillon, Merlot, and Carmenère. The vineyard was incorporated as a stock company in 1923 and shares were sold in the Santiago stock market.[2] Concha y Toro began exporting wine in March 1933 to the port of Rotterdam, the Netherlands. In 1950, the winery began to acquire more vineyards and also began the process of adapting its business to new markets and meeting a higher demand.

In 1971, Eduardo Guilisasti Tagle became Chairman of the Board, who succeeded in expanding the company. In 1987, after partnering with U.S. importer Banfi Vintners, the company started to incorporate more advanced technology in all of its production stages. It also started using small French oak barriques. In 1994, shares of Viña Concha started trading on the New York Stock Exchange.
View all Concha y Toro 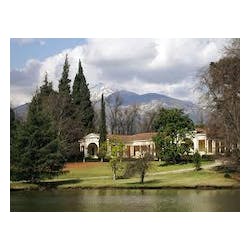 No questions posted yet about this item.
Pretty good
"Good, not special."
Posted byPaul on Apr 20, 2022Verified Purchase
Subscribe to our newsletter!