Item Sold Out
While this item isn't currently available:
John Gilman 93+
"The 2015 Mas de Daumas Gassac rouge is primarily cabernet sauvignon (seventy-nine percent), with the remainder of the blend made up of seven percent merlot, six percent cabernet franc, and two percent each of petit verdot, pinot noir, nebbiolo and dolcetto! I like the precision and ripeness shown here on the nose, as it delivers scents of black cherries, sweet dark berries, tobacco leaf, dark soil tones, just a whisper of tariness (from ... read more

John Gilman 93+
"The 2015 Mas de Daumas Gassac rouge is primarily cabernet sauvignon (seventy-nine percent), with the remainder of the blend made up of seven percent merlot, six percent cabernet franc, and two percent each of petit verdot, pinot noir, nebbiolo and dolcetto! I like the precision and ripeness shown here on the nose, as it delivers scents of black cherries, sweet dark berries, tobacco leaf, dark soil tones, just a whisper of tariness (from the nebbiolo and dolcetto?), discreet cedar, hints of the lavender to come and a topnote of violets. On the palate the wine is pure, fullbodied and youthful, with a superb core, lovely soil signature, firm, fine-grained tannins and excellent focus and grip on the nascently complex and promising finish. There is more breed here than in the very good 2014 version and this is clearly going to be a great vintage of Mas de Daumas Gassac in the fullness of time." 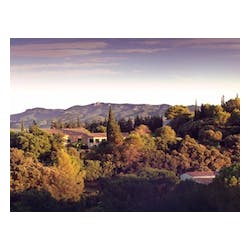 "For many, this estate needs no introduction. Often referred to as the Grand Cru of the Midi (South of France), the Mas de Daumas Gassac top-tier wines have reached international cult status. Located in the majestic Gassac Valley, the estate benefits from the cool microclimate derived from the Gassac River, several natural springs (from which the Guibert family drinks), and the influence of the nearby mountains. The soil that dominates the valley is a rare and still unexplained red, powder-fine glacial soil, which is strikingly similar to that found in the prime areas of Burgundy. This combination of characteristics is quite unique in Southern France.

There is great diversity in the Gassac vineyards. With 40 different grape varieties planted in the valley, the vineyards are like museums of rare and uncloned vines from around the world: Israel, Portugal, Switzerland, Armenia, Madeira, etc. The estate was farmed in a traditional and natural way long before the Guibert family established the Grand Crus vineyards of Gassac. They were the very first estate in the Languedoc to adopt full organic farming and can honestly say that the Gassac estate has never seen any chemicals. Their commitment to preserving and protecting the land is unparalleled. After all, it's where they eat, drink and live!

Aimé Guibert purchased the vineyards in 1974, and began planting grapes. The first official vintage of the Grand Vin was 1978, with the help of the great Bordeaux enologist, Emile Peynaud. The red has a high percentage of Cabernet Sauvignon (around 80%) with the remainder a mix of many different varietals that are planted on the property including Merlot, Cab Franc and Tannat, as well as some other less expected varietals like Pinot Noir, Nebbiolo and Barbera. The White is made from an intriguing blend including Chardonnay, Petit Manseng and Viognier, as well as bits of Chenin Blanc, Rousanne and Marsanne. The wines are aged for 12-15 months in oak before bottling. Both the red and white blends have an extraordinary ability to age and remain vibrant and youthful for twenty, even thirty years.

Several years back, the Guibert family began working with a neighboring cooperative in Sête to produce fun, full flavored wines from the surrounding countryside and rocky hillsides. Organic farming is de rigueur and the vinification is closely overseen by the Guibert family. The results are splendidly aromatic wines that bring out the terroir of this Mediterranean region. The Moulin de Gassac wines are named after St. Guilhem, the patron saint of the area in the village of St. Guilhem le Desert, one of the most stunningly beautiful villages in Europe drawing people from all over the world. There is a delicious aromatic white wine, as well a luscious dry Rosé, and a lovely fleshy, spicy, garrigue-influenced red."