"The opulence of this wine is evident by its beautiful golden straw color. Aromas of spiced pears, caramel and baked apple are layered over butterscotch and brown barrel spices. The flavors are an enticing play of crisp apple and cream, Crenshaw melon and Crème brûlée. We make this rich, full-boded chardonnay in the traditional manor with barrel fermentation and lees stirring to give the wine a luscious viscosity and elegance. Pair this delicious Chardonnay with smoked gouda, grilled chicken salad, or even fish tacos."
'As a farm kid growing up in the late 1950’s and early 1960’s John Giguiere was a confirmed pyromaniac starting various things on fire such as his father’s wheat fields. He and his brother graduated to launching rockets, which often blew up at some stage of the journey resulting in more random fires, and calls to the local fire department. They eventually grew out of this fascination with the Matchbook, but still have fond memories of the power they possessed.
"Six different clones of chardonnay were used in this wine and all were picked at night and delivered to the winery before sunrise to ensure that fresh cool grapes were crushed. Clone 809 (the most exotic clone) was cold tank fermented to retain its Muscat character. The other clones were barrel fermented in a combination of French, American and Hungarian oak. Yeast “cocktails” (a mixture of the winemaker’s favorite compatible yeasts) were used on all lots to ensure complex fermentation characters would evolve in the wine. We stirred the lees weekly for eight months to enhance texture and flavor." ~ Winery notes

View all from Matchbook 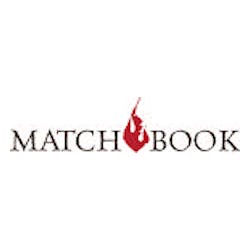 As farm kids growing up in the late 1950's and early 1960's, the Giguiere brothers were veritable pyromaniacs, setting numerous things on fire--including the family wheat fields. Fearing total ruin of house and farm, the boys' father one day left them at the city jail for an hour's "stay" to impress upon them the dangers of their fascination with fire. But it was to no avail. They soon graduated to launching rockets, which resulted in more uncontrolled blazes and calls to the fire department. Over time, the Giguiere boys outgrew their fascination with the flame. But even today they look at the Matchbook brand with fond memories of the fires they once stoked. Dunnigan Hills is often overlooked in conversations about Wine Country. But a lot of wineries from other appellations purchase fruit – a lot of fruit – from our vineyards. Those who have never visited, lump us into the Central Valley. Winery insiders know these hills are a hidden gem. The soils are full of red gravel; the nights are cool and breezy; the growing season is long as is the horizon. This region checks every box for premium wine grapes, but we are never satisfied with just checking boxes. We are propelled by innovation. Experimental trellis techniques and irrigation methods, new clones, cover crops and tilling. There is nothing we won't try in our life's mission to improve the quality of our appellation. Dunnigan Hills is worth looking over.

"My wife loves this chardonnay. We had it at Spanky's Restaurant in Vergas, MN, a few weeks ago and ordered 6 bottles shortly thereafter. She has now consumed two bottles and is starting the third tonight. It is a little more buttery and less acidic than some now on the market, but it is a really easy drinking wine, one that pairs with food but is still good as a sipper. I am ordering 15 more bottles today."