Vinous Media 98
"The 2018 Cabernet Sauvignon was just bottled this past summer. It is of course a very young wine, but possesses tremendous aromatic nuance and freshness to play off a core of huge dark fruit. Readers will have to be patient with the 2018, as it is an imposing, vertical Cabernet that needs years to be at its best. Bright floral and spice notes lift the soaring finish as the wine's inner sweetness gradually  ... read more

Wine Spectator 97
"This distinctive version leads with pine forest, sweet bay leaf and savory notes, with a core of steeped currant and bitter plum fruit, plus ample tobacco and warm stone notes in the background. The finish is chiseled in feel, with racy acidity taking just as prominent of a role as tannic grip. With range, character and energy to spare, this should cruise in the cellar. Best from 2025 through 2045. 2,650 cases made. – James Molesworth"

The Vintage
With abundant February rains, followed by a lot of filtered light in spring and early summer. Both bud break and flowering occurred a bit late but under ideal weather conditions, creating a plentiful and even fruit set. Summer brought generous sun during the day and cooler marine influences and evenings—for which Napa Valley is known—virtually uninterrupted by any major heat spikes. Mount Veeder is a unique appellation with a cooler mountain climate and the lowest yields in Napa Valley. Soils range from poor volcanic deposits to ancient seabed; the grapes produced here retain high acidity and a clean, mineral character.

The Estate
High on the slopes of Mount Veeder, Mayacamas Vineyards has been a source of legendary California wine since 1889. Since the 1950’s the vinification and élevage of Mayacamas remains remarkably consistent and their continued commitment to employing classical techniques and tools is integral to the character of these wines. The mountain terroir at Mayacamas ranges from 1,800 to 2,400 feet in elevation and the estate spans 475 acres, only 50 of which are dedicated to vine. The region’s richly intense, age-worthy wines reflect the independent spirit of its mountain growers and vintners, borne of rugged conditions that demand craftsmanship at the highest level.
About Mayacamas
At the crest of Mount Veeder, a sinuous appellation that clings to the Mayacamas Mountains' southern reaches, rests Mayacamas Vineyards – as it has for over a century. Here, at 2,400 feet, above the din of Napa's valley floor, fifty acres of vines quietly speak to both an unshakeable past and a fortitude for the future. Their fruit find its voice in a stone cellar built in 1889, and, when bottled, it shares with us a story of humility and commitment – unadorned, with concentration, elegance, and balance.

Since 2013, the Schottenstein family and winemaker Andy Erickson have rigorously attended to the identity of Mayacamas – not merely with the intention of preservation, but invigoration. Working with Travers in the 2012 vintage, the winemaking team learned to forgo new oak and instead implement the winery's existing old casks – anything that still held wine. Only minor changes have since been implemented, including cooling equipment to stabilize fermentations and lengthen macerations (from twelve days to perhaps twenty). Greater work stood before them in the estate's fifty planted acres. The winery called on Phil Cotturi, to replant the ailing, phylloxera-afflicted AXR-rooted vines, and to institute organic viticulture and continue dry-farming. The replanting process – only about five acres per year – promises to revive the estate's yields for the next generation
View all Mayacamas 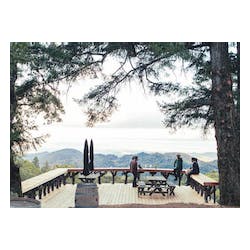