“The Cape’s signature variety. We have the largest planting of this variety in the world, and have been cultivating it since the late 1600′s. Chenin Blanc possesses great natural acidity and a succulence on the palate that makes some of the tastiest wines in the world.
Way back in 1996, Mulderbosch was one of the very first wine producers in the Cape to appreciate the unique potential of the grape enough to ferment it in barriques. The resultant wine quickly garnered an avid following and has since become synonymous with the variety.”-Winemaker’s Notes

“Widely recognized as one of South Africa's most iconic producers, Mulderbosch is well-known for its Sauvignon Blanc, Chenin Blanc, Rose and its Bordeaux blend - The Faithful Hound - and is located east of Cape Town in the Stellenbosch Hills. Stellenboxch has a Mediterranean climate that is largely impacted by the confluence of the Atlantic and Indian Oceans, with long, warm summers and cool windy afternoons. Recently acquired by Charles Banks, an American, Mulderbosch has entered an exciting new era of quality. A newly-assembled team promises to re-introduce wine lovers to the many charms of this approachable, easy-drinking, collection of affordable, fun wines. South Africa provokes an unbelieveable platform for making some of the best white wine values in the world.”-Winery Notes

View all from Mulderbosch 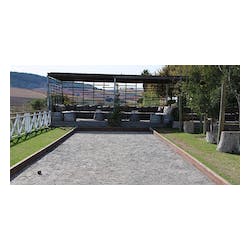 Since its founding in 1989, Mulderbosch Vineyards has widely been accepted as one of South Africa's foremost wine producers. In 2011 Mulderbosch was bought by California-based investment company Terroir Capital with well known wine investor Charles Banks at the helm, who had long desired to invest in the Cape Winelands.
Although wine guide author John Platter famously referred to the Mulderbosch Sauvignon Blanc as "South Africa's most celebrated Sauvignon", the entire Mulderbosch portfolio has consistently represented high quality wines of distinction for which it has gained an enviable track record. Offerings include our Faithful Hound Bordeaux-style blend; a varietal Cabernet Sauvignon Rosé; a Barrel Fermented and lightly wooded style of Chardonnay; a Chenin Blanc sourced from predominantly old bush vines and a deliciously decadent Noble Late Harvest made from Sauvignon Blanc.